Issues #158-163 involve what the Ff call the “5th Dimension.”  Ben Grimm makes the lame joke about the band who sang “Aquarius,” so you don’t have to.  Roy Thomas is on board as writer, and the scripts are noticeably better than Conway’s were.  Thomas was pretty much Stan Lee’s right-hand during this time, and he clearly studied story beats at Lee’s knee.  The pacing is crisp, the characterizations are distinct—if overdrawn, and there’s a little too much dialog.  Thomas has a little less bombast, but he’s still into the hype and breaks the fourth wall by talking to the reader way too often.  Personally, I find that that kind of narrative is awkward.  Yes, everyone was doing it, but when the author speaks to the reader about the characters in the story, it creates distance that doesn’t need to be there. 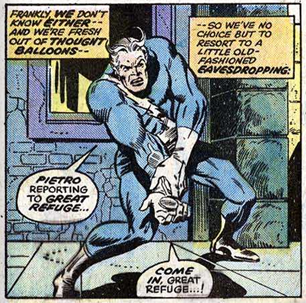 Some of the art choices are odd too.  Like, what is making it so hard for Quicksilver to use a communication device in the above panel?  It feels like there’s a disconnect between the writer and the artist in these issues.

Anyway, the team FFROOOOMs off to face a threat in an alternate dimension.  For once, the main team gets captured and rescued by Sue, who stowed away.  (Sue is a part-timer now, replaced by Medusa, because Franklin needs his mommy.)

Then, the 5th Dimension storyline gets really weird and confusing.

Guest artists John Buscema and Chic Stone take Ben Grimm on a Steve Ditko-ish psychedelic interdimensional long walk.  It’s a little out of Buscema’s safe zone in terms of artistic content, but he does a fair job.  But that’s not what’s really weird here.

The FF, who have been beating up their landlord for nearly two years of issues so far, finally have to face their money problems and Reed incorporates the team and “sells out.”

I’ve always wondered if there was a backstory here, because I’m pretty sure this was right about the time that Stan left the day-to-day operations of Marvel to others and went to Hollywood to try to get some Marvel movies made.

These last issues of this arc involve Arkon and a threat of an ice age.

And look what he does to Lockjaw! But this is kind of neat:

Creators: Roy Thomas and Rich Buckler (except #160, art by John Buscema)
Grade: B-