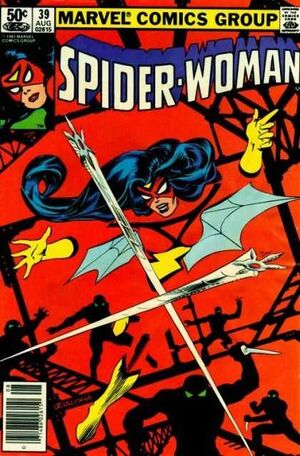 This is really starting to feel like a Chris Claremont book.  Both last issue and in this one, there are brief interactions with Morgan Le Fey that don’t do anything more than remind us that Spider Woman is on the witch’s radar and, ultimately, will need to be dealt with.  Plus, there’s ninjas.

Japan’s mafia is moving in on Jessica Drew’s landlord (and budding love interest) David Ishima, so Spider Woman fights an army of ninjas.

The Yakuza warriors are called Death-stroke and the Terminators, a clear reference to DC’s Slade Wilson, aka Deathstroke the Terminator.  Not sure why Claremont wanted to give a shout out to DC’s Teen Titans, a book created solely to counter Claremont’s unbeatable sales on X-Men, but it’s an interesting little sidebar.  It’s Death-Stroke’s first appearance.  He’ll not appear again until he is killed in Captain America #395.