One thing being a direct market book, with no ads, enabled Marvel to do was start adding editorial pages on the inside front cover.  In Marvel Fanfare, Al Milgrom would draw cartoons of himself telling the reader about the story (which often felt like justifications for using inventory stories).  In Ka-Zar, Jim Shooter, editor Louise Jones, and artist Brent Anderson did a photo story that was (kinda) funny.  Interesting how Louise understands that Shooter wants more sex in the book.

Later, Marvel would do a general distribution one-shot called Marvel Fumetti, which was all photos.  Problem was, without the special paper used for covers, the newsprint of black and white photos bled like crazy and the book was just a muddy mess. 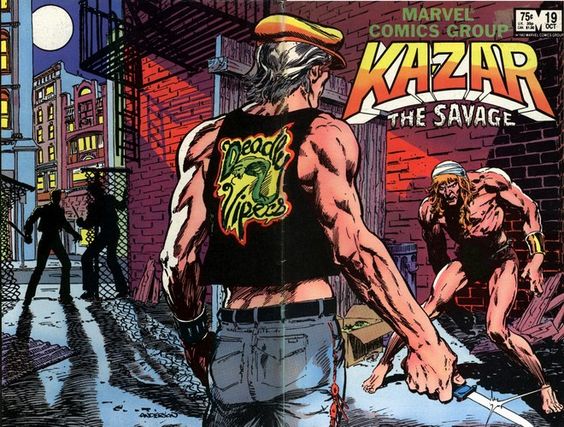 Another thing direct market allowed them to do: Wraparound covers.  Nice. This story starts with Ka-Zar having built a nice home for himself and Shanna, including an elevator (on a pulley-rope made of vines) and in-room bath (a hot spring).  It’s a cute sequence that lets us know their relationship is deepening.

From there, some scientists arrive in the Savage Land (and one of them is a hot blonde), which introduces a love triangle (there’s Jim Shooter’s sex request being answered!), Ka-Zar is shot “accidentally” by the hot scientist, and has to be taken immediately to New York for medical attention.  That’s where it gets really interesting, because Ka-Zar escapes the hospital (he’s a little loopy from being shot in the head), and the hot scientist who “accidentally” shot him hires Kraven the Hunter to capture Ka-Zar.

That’s where Ron Frenz takes over as artist, with issue #20, and does a bang-up job.  And the “origin” of the creative team is actually told in the comic, in a scene at a comic con. 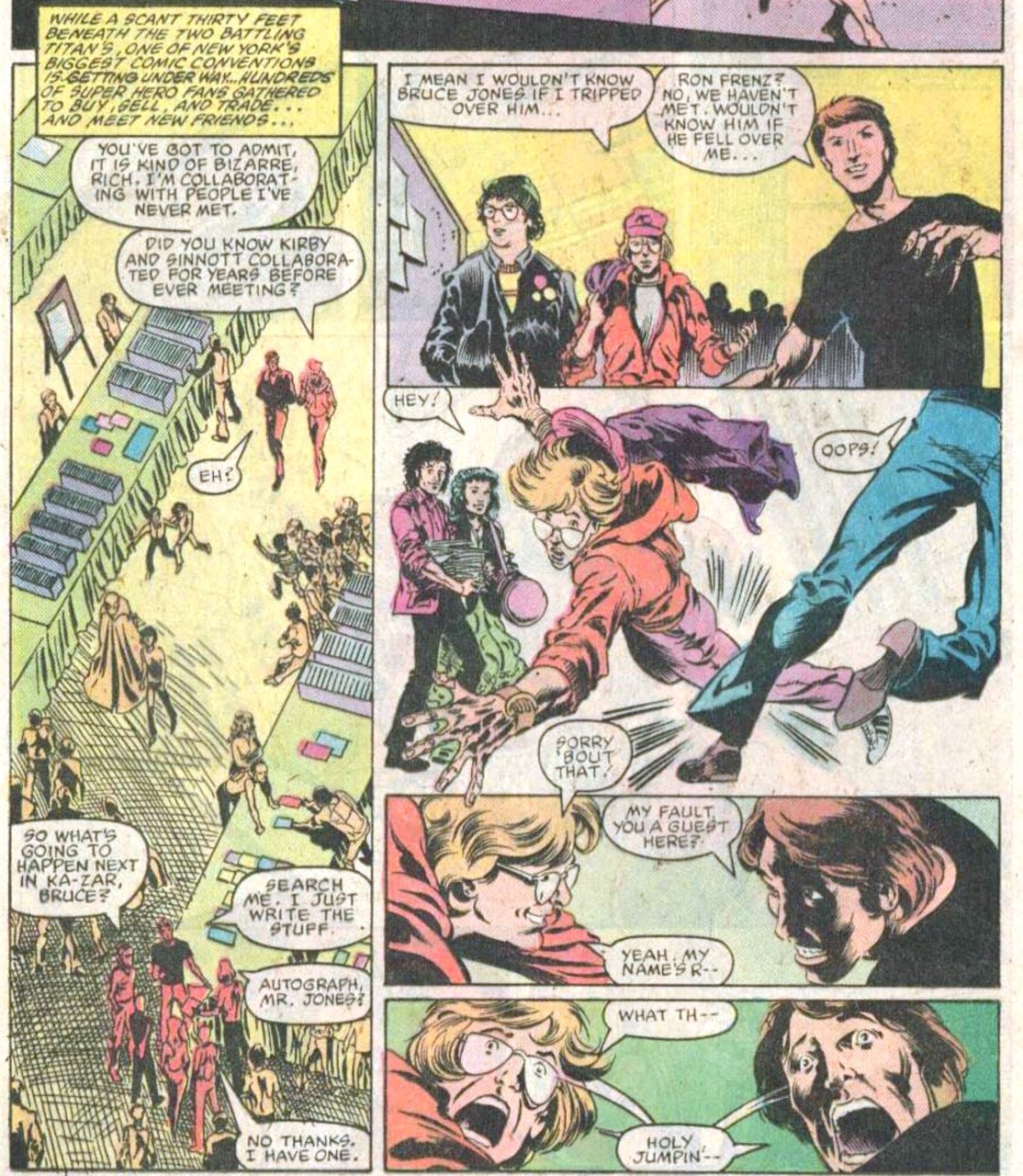 I question Kraven going undercover in a purple overcoat, but he ditches it as soon as possible…

Zabu, Shanna and Ka-Zar being loose in the city allows for some comedy… We also get to see Shanna, in her loin cloth, arguing in court for Zabu’s release since he’s the best tracker to find Ka-Zar.  Some courtroom drama!

Eventually, Ka-Zar and Kraven fight, and the hot scientist (named Ramona) decides to shoot Kraven because she wants Ka-Zar for herself (she needed Kraven to find him, but didn’t want Kraven to kill him), but she misses, and Kraven falls off the roof.  Ka-Zar leaps to save him, and also falls off.  Shanna leaps to save Ka-Zar, and she also falls (it’s actually a cool sequence, with each character grabbing the arm of the next one but the weight pulling them off the roof), and all three are falling when… 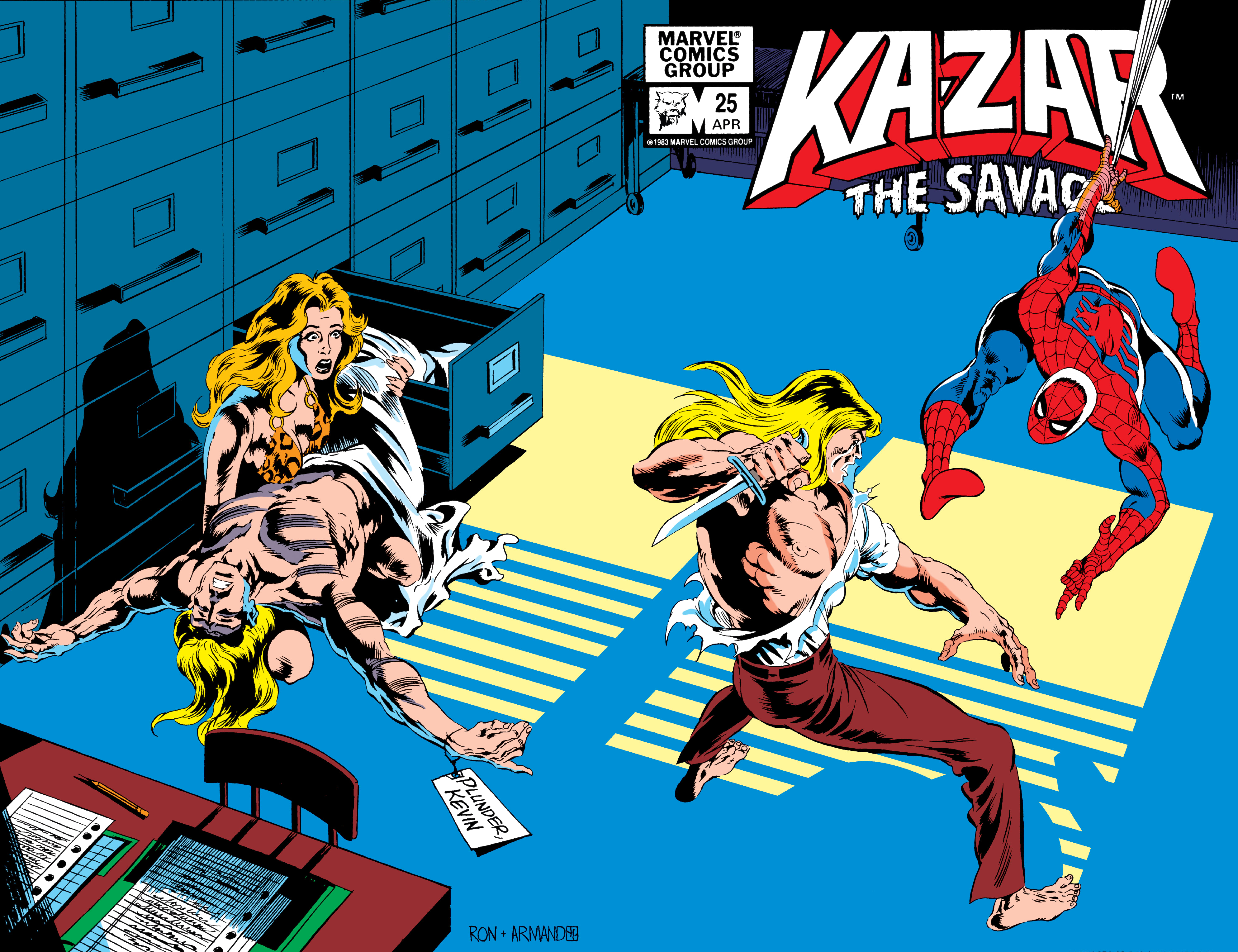 Spider-Man saves them!  Because this is New York, the city of heroes and coincidences!  I do love how dramatic Spidey looks in that panel.  In the end, Ka-Zar is returned to the hospital for surgery and…He doesn’t survive!

Issue #22 has a new title, Shanna the Savage! 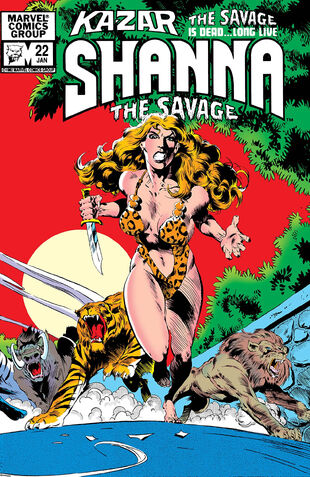 It’s a nice solo Shanna story, mostly featuring her hanging out with Peter Parker and punching doctors.  I would have liked the suspense to have lasted longer, but I understand: Shanna’s solo book never did sell well.  So, by issue #23, we’ve got a tale titled, “Resurrection!” in which we learn that the scientists were actually AIM agents, who took Ka-Zar off the operating table, brainwashed him, and are using him (still in a loincloth) to commit international crimes.  And, of course, they put an exploding brain chip in him so Shanna can’t do much about it.

It all moves by very quickly, and soon Ka-Zar is back in New York looking for Shanna and fighting Spider-Man (who is still hanging out with her as Peter Parker), and they end up back in the Savage Land in the end. 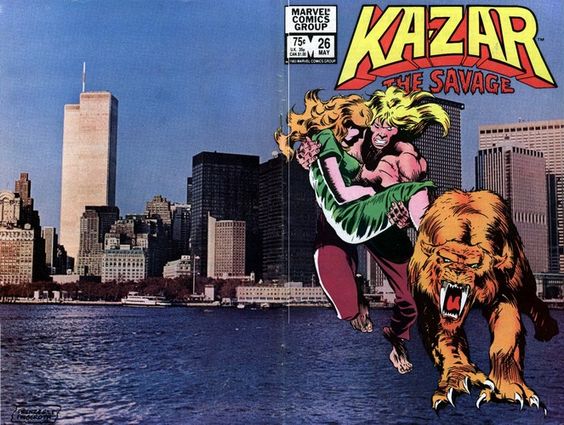 This is easily the best Ka-Zar story Marvel has published up to this date, and not just because it incorporates Marvel Universe characters.  Shanna is still a little bit of a “girl” but she gets a solo adventure and is a major part of the action, as is Zabu.