Steve brings back Mantis, one of his most controversial creations from his time with The Avengers–back when he was at the peak of his powers–and has her stuck in a container by Kang.

It’s very confusing to have this storyline appear so close in time to the “Kangs” story in Avengers because they have nothing to do with each other and don’t even seem to appear in continuity together.

There is an attempt to explain it though.

I understand that at the time, though, the editorship at Marvel was kind of in flux.  Tom DeFalco was Ed-in-Chief, but Ralph Macchio was editor of FF and also scripted some fill-in Avengers issues, so really: No excuse.  Other than that they wanted to let Steve be as weird as he wanted to be.

And anyway, time travel is always explainable through mumbo jumbo.

I love Steve.  Usually.  But I am so ready for him to quit this book.  Sometimes, making my way through every issue is a long hard slog.

Anyway, Mantis dies in the end.

Well, not dies exactly.  But leaves this body and disappears until 1995.

And speaking of ends, Thing plays grabass with Ms. Thing. 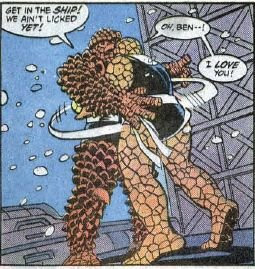