First appearance of The Thunderbolts.  The black street gang, not the team of villains/heroes of the 1990s.  Actually, these Thunderbolts are black militants. Their leader, William Carver, will become the superantihero Thunderbolt.  But he will never be a member of the Thunderbolts, because he’ll die decades before that series is even a concept.

Also, the first appearance of Turk Barrett, the hood that Frank Miller will bring back as a running gag.

I noticed: BP and DD may be the only Marvel heroes with a single colored costume. Not a great issue, but we get a Vice Presidential cameo and look how Gene Colan had the half-mask hovering over LBJ in the panels above.  Beautiful.

And not so beautiful: Roy Thomas jive. 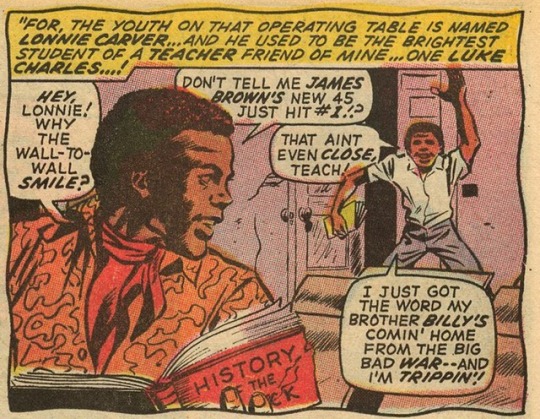