This is a strange little story.  Thing and his three pals go to Project Pegasus, which is actually an acronym.  I never realized that.

Mole Man’s moloids are tunneling underneath, and they’re at war with the lava men.  There’s a lot of stuff about that, and about Thing being relatively friendly with Mole Man.  (Which is weird because he keeps trying to blow up the world, but whatever.)  At least he fights with them first.

Anyway, the adventure starts with Thing jumping in a hole.  We haven’t been able to use our “Thing in a hole” tag for a while, so that made me happy. The Lava Men drag Mole Man into a pit of lava, and Human Torch runs to the rescue. 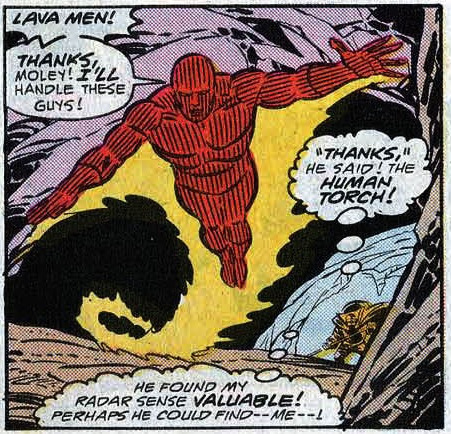 Initially, Thing says he’ll dive in and save him–but Crystal shows him why that won’t work.

Crystal, with her power over the Earth, goes into the lava to save him, which causes her to get overheated and Johnny “absorbs her heat.”  That’s what the kids are calling sex these days, I guess.

So, the soap opera set in motion by Thing–his attempt to lure Johnny away from Alicia–is moving along nicely.

Note: Black Panther is tagged because he appears briefly in the beginning, finishing up his visit from previous issues. 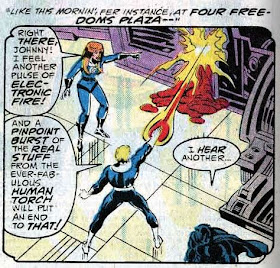