Gary Friedrich was an interesting 1960s comic book writer.  Sometimes, he’d do really cool stuff, like creating Ghost Rider. Other times, he’d do really solid work with licensed-type properties like Frankenstein.  And my favorite of his stories was the first version of “Hulk On Trial,” which would ultimately become a trope and lead to the incredible Planet Hulk story that’s soon to be part of a major Marvel movie (Thor 3).

His work on X-Men was short, but he did an interesting issue about the reading of Professor X’s will.  Yeah, that’s Foggy Nelson as the attorney.  All in all, these stories still don’t “matter”–but they’re better than most X-Men stories of late.

Foggy presides over the reading of Professor X’s will, and then Cyclops, being the douche that he often is, decides the team needs to break up.  For some reason, and it’s not clear why, it’s at that exact moment that Juggernaut is pulled free from the crimson cyttorak dimension and appears in the mansion.

They fight, but then just as suddenly Juggernaut is pulled back into the crimson cosmos–Professor X had a failsafe to put him back there if he got loose and wasn’t reformed yet.

Yeah, it’s just an excuse for a fight.  But I like Juggy, so I don’t hate the story.

Issue #47 is a Beast/Iceman story.  It’s fine, but it’s nothing worth writing about. 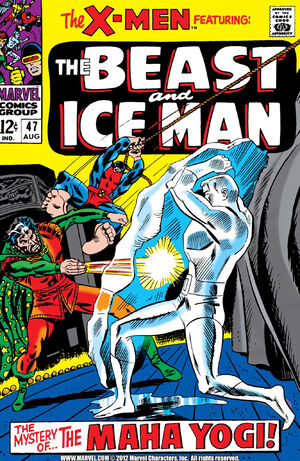