Everybody needs a good pirate story. And if you can’t have a good one, you can at least have a so-so one. Hulk fights Captain Barracuda and gets stranded on a desert island where he meets Robinson Crusoe.  And Barracuda does the classic comedy move of looking through the periscope with his eyepatched eye.

It’s a very strange couple of issues.  Especially odd is that Marvel has an editorial cross-reference to Marvel Classics #19, which is their comic book retelling of the classic novel, Robinson Crusoe.

Turns out, it’s not the “real” fictional character, it’s just a weirdo who took on the identity because he’s been alone with coconuts for too long.  And he wants Hulk to be his boy Friday. 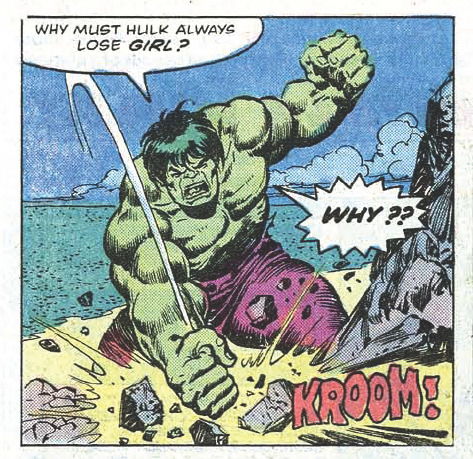 None of this is anything like episode #220 of the TV Hulk starring Bill Bixby.  In that episode, he beat up a laundromat.