Sharon “Ms. Marvel” Ventura doesn’t adapt well to having been mutated by cosmic rays last issue, while in space.  She and Thing crash land in Wakanda (what a coincidence!) and fight a little because she’s mad. The panel above is sloppy.  The Thing’s chest just kind of disappears.

When in Wakanda, have a brief interaction with Black Panther… 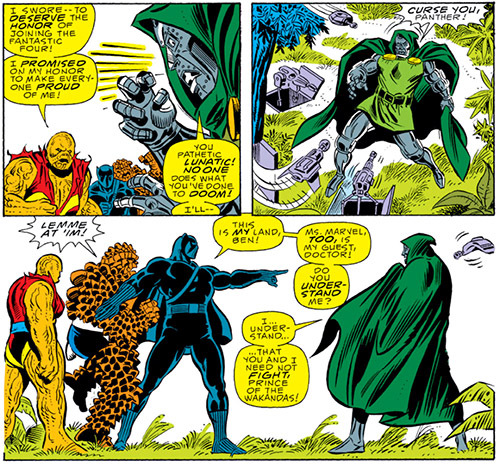 They learn that Dr. Doom is exiled from Latveria, which has been taken over by his son, Kristoff.  Doom is living in Wakanda with Black Panther.  Which is bizarre.

Like I said, she doesn’t react well at first, but by the end of these issues….

I have to say, the tone of the book is changed completely by Englehart: It’s no longer a science fiction book about a team trying to make discoveries and advance knowledge.  Now, they’re just a supergroup.  But they’re weird.  Even weirder than The Defenders.