The Fixer breaks out of prison and tries to steal the Awesome Android from where it is currently living—a barn in the Midwest, hiding from reality.  The Avengers come in to stop Fixer, but Android reacts to them as if they’re attacking him.  Dispatching The Fixer isn’t hard, but Awesome Android is a formidable opponent.

During the battle with the Android, The Fixer escapes.  Mentallo mentally cries out for help—he’s being tortured at The Fixer’s base.  The Avengers storm Fixer’s base, and take him out.  When they get there, we learn that Fixer is…Not Fixer.  The real Fixer was replaced by Super-Adaptoid, who escaped before The Avengers arrived at his based, and has now tricked Machine Man into joining with him.

He’s looking at all the robot villains in the MU and trying to unite them all–hence the title of the arc: Heavy Metal.

There’s a lot of development of Captain Marvel as in ineffective leader in this storyline.  I know that Roger Stern quit working for Marvel over this—editorial wanted to bring Captain America back to the leadership role—but it seems like they could have moved her out of the role without making her appear incompetent.

The pair then activate a buried Kree Sentry robot and bring Awesome Android back in the battle—on their side.  They are basically doing a “rise of the machines” story—wanting to take over the world from humans.  Some of the Avengers team tracks them down and there’s a big fight, and the Avengers lose.

Awesome Android has always been a pretty simple-minded character—and he doesn’t speak yet—so having him align with Super-Adaptoid doesn’t offend me.  But Machine Man hasn’t had these kind of anti-human sentiments in the past.  Seems out of character.  And in fact it was:  When the rest of the team comes and saves the day, we learn that Machine Man was tricking Super-Adaptoid into thinking he was on board with the plan (and also, Fixer was really Super-Adaptoid—and Machine Man sensed that the villain was more than just The Fixer), and he helps the Avengers overcome the various robots.

But we then learn that Super-Adaptoid’s real play was getting the cosmic cube, which is now the form of Kubik (since Defenders #150), and he has been drawing closer to its location so that he could absorb/adapt the cube’s cosmic power and then use its power to replicate himself over and over—one Adaptoid for every single person on Earth.  Then, his clones would kill their hosts.  Kinda like Invasion of the Body Snatchers.  Kubik doesn’t like this—so he brings in The Captain (remember, he’s not Captain America anymore) to save the day.

This exaggerates Captain Marvel’s leadership failures as the cause of all the problems here, and if Steve Rogers had just been charge, this never would have happened.  But that seems like a bit of a reach—it’s not like the same kind of bad suff never happened when Rogers was in charge.  She’s portrayed as a weak link for this whole story. 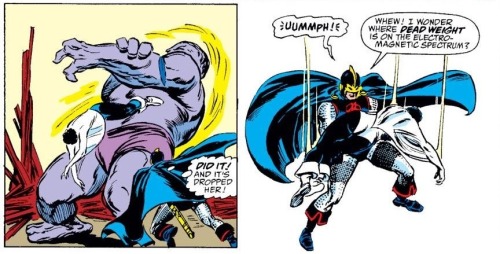 Also in these issues, the Avengers move their mansion to the Hydrobase.  Makes sense to be out of New York City, so civilians won’t be hurt and private property damaged when dolts like Fabian Stankowicz show up and start thrashing around.  Stingray also lives there, so he teams up with The Avengers in this story.

This story is the end of Roger Stern’s reign as one of the greatest (if not THE greatest) Avengers scribes of all time.  He got a plotter’s credit for #287 before handing it off to Ralph Macchio.  Like Kurt Busiek, Macchio was a letter-writer who eventually got invited to write a couple issues.  Macchio was a great editor, but, unlike Busiek, his scripts were…Not memorable.

In the end, though, Captain America–in his alter-ego as US Agent–beats everyone.

Roger, I miss you already.