As with all X-books, there are tons of subplots and slow-boiling threads.  This is because there’s such a large cast of characters.  This issue has a lot of “check-ins” on the various characters and goings-on, like Cyke and Jean are still in an awkward relationship, clearly having feelings for each other, while Madelyn Pryor-Summers is still missing (we saw her wake up in a hospital, but Scott and Jean don’t know about that yet).  Most of the issue about these two, and they even fight each other over how much they love each other.

Also, Iceman’s powers have been going out of control and on-and-off a lot lately, in the aftermath of Loki messing with him in Thor #377-378 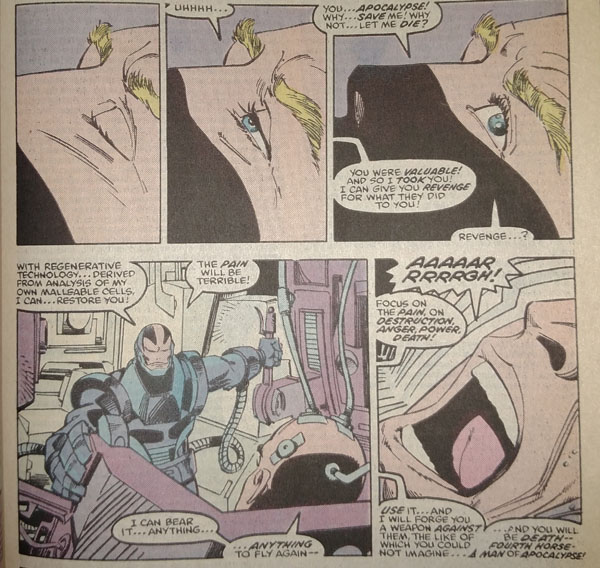 And Angel is still deemed dead and Cyclops still blames himself.  But in this issue we learn that Apocalypse has him—and is giving him his wings back.

There are a bunch of young mutants who are now hanging around with X-Factor since the Massacre.  Former Morlocks, Rictor from the anarchist group The Right, etc.  I haven’t been tagging them but maybe should have been because some of them have major recurring roles, like Skids and Leech.  Oh well.

It’s weird that there are so many kids here with a group that is supposed to be hunters of mutants—especially when there’s already a “New Mutants” comic about a class of youths being trained to be the next class of X-Men.

Media mogul and X-Factor hype man Cameron Hodges continues to seem sinister while he promotes the team’s public-facing, mutant-hunting agenda.  In this issue, we learn that he has been messing with Scott’s head to make him approve of Hodges’ overall agenda for the X-Factor team.  So, he’s revealed as a villain. The other big “reveal” is that Jean Grey is really Phoenix.  This kind of confirms what we all suspected.