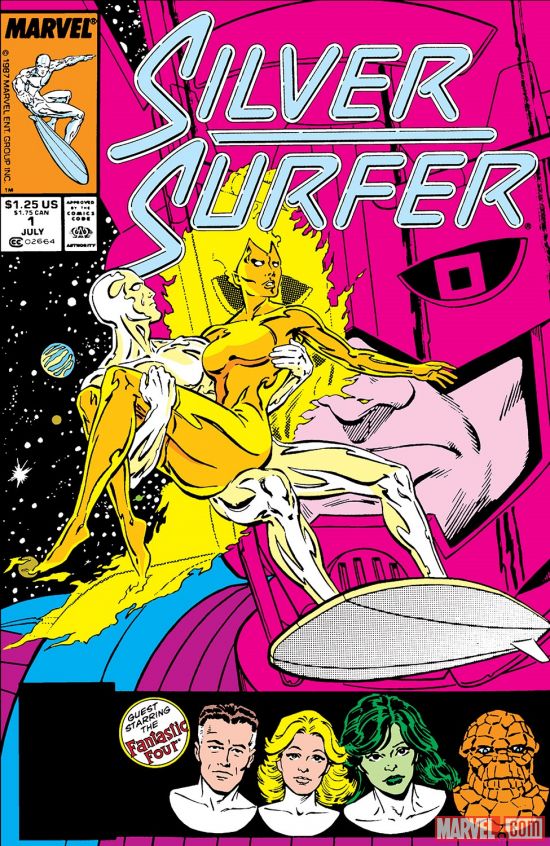 It’s been a long time since we had a stand alone Silver Surfer book, and the character hasn’t been appearing all that often even as a guest.  And speaking of characters we don’t hear from that often… The Champion literally explodes on the scene while Silver Surfer is dialoguing with the Fantastic Four.  He’s here on behalf of the Skrull empire, who have kidnapped Nova (formerly Johnny Storm’s girlfriend Frankie Raye, now herald to Galactus) and are using her to blackmail Galactus into helping them fight their war against the Kree.

Surfer and Champion battle, Surfer wins, and that means Champion is now his servant.  Not sure why, but that’s Champion’s logic.  So, Surfer decides to go save Nova.

But, you’re thinking, he’s still trapped on Earth by the barrier created by Galactus, right?  Wrong.  It turns out, G’s barrier only prevents Silver Surfer’s board from leaving Earth.  So Silver Surfer changes his board into cosmic energy, steps across the barrier, and then re-forms the board.

Why did it take him over a decade of comics to figure this out?

But OK—this is how Steve Englehart gets Surfer free so that he can tell space stories.  Fine.

He makes a beeline for Galactus, his eyes picking out his former master’s form a million miles away. And while Galactus’ initial reaction is to disintegrate him for breaking through the barrier, he stops when the Surfer tells him he’s here to help Nova. The Surfer even senses that Galactus is in love with Nova, “as a man cares for a woman”. So, Surfer and Galactus team up—and in the process, Galactus reveals that he is in love with Nova.  Surfer is successful, and Galactus removes the Earth barrier so Surfer can come and go as he pleases.

Putting to one side the silly “escape from the barrier” loophole, this is a good issue.  It’s also giant-sized, just like the first Silver Surfer series, written by Stan Lee.