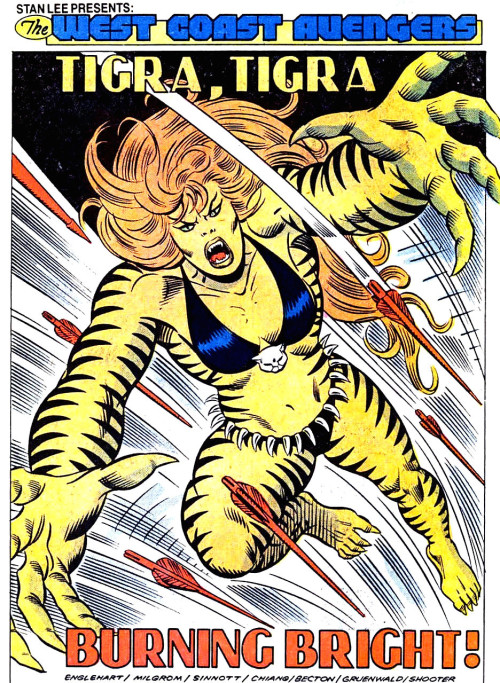 I guess it was inevitable that eventually we’d get an issue titled, “Tigra, Tigra, burning bright!”  And another titled, “The lady or the Tigra.”  These are those stories.

Since they’re facing an extradimensional threat, they call on Daimon Hellstrom and Patsy Walker for help.  The newlyweds live in a Brownstone (street #666, naturally), and the Avengers just sit on their front steps waiting for them.  Seriously.  In full uniform.  Nobody in the neighborhood recognizes them and asks for autographs.

I guess I shouldn’t gripe about that being unrealistic, given that this is a superhero comic with demons in it.  But still. Hellstorm has changed his costume and doesn’t go by Son of Satan anymore.  Good choice, dude.

Then they fight.  And win, of course.  And we get to see Master Pandemonium’s origin, as if anyone cares.  Mephisto busted up his soul into five parts.