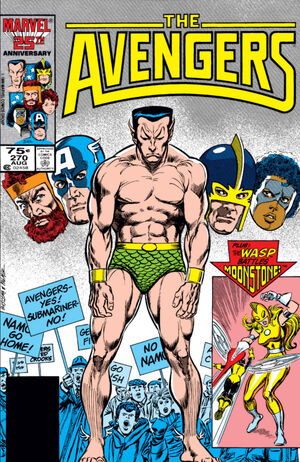 Tons happens in these issues.  First, they introduce a major Prince Namor story and also bring us a new Masters of Evil.

It starts with a slow burn: People are protesting Sub-Mariner being a member of The Avengers because, you know, he’s waged war on the surface world umpteen times.  Karla “Moonstone” Sofen sees this as an opportunity to cause trouble, and instigates the crowd into rioting.  Wasp sees her and goes after her.

After a fight, Moonstone is captured and handed over to the authorities—but the cops driving the prison truck were killed and replaced by Absorbing Man and Titania.  They basically tell Moonstone she’s got to join up with them, or they’ll kill her, too.

This is the first time we’ve seen Titania since her debut in Secret Wars, and her romance with Absorbing Man would continue for decades. Crusher Creel is one of my favorite villains, and I’m pleased he’s back.

After the rioting, Namor leaves to go have his adventures with Alpha Flight in Alpha Flight #36.  But not before he meets his match: Six old white men who sell insurance.  Seriously.

Next, Paladin and Wasp interrogate Rita Demara, who stole the Yellowjacket costume in issue #264.

Roger Stern gives all the Avengers face time, which means that we often get continuity-heavy quick clips—a page or two—at a time.  It’s a good way to handle a book with so many characters, but it can make casual readers feel lost. We then see Monica Rambeau talking to The Avengers’ FBI liaison, who tells her that Whirlwind, Grey Gargoyle, and Mister Hyde have broken out of confinement.  (Yay!  Grey Gargoyle!  We haven’t seen him in years!)

So you see what Stern’s doing here, right?  He’s gradually bringing a bunch of villains together.  But before we get to the money-shot of the new Masters of Evil forming together, Prince Namor introduces the next big storyline. Very cool to have a major event—which will be Avengers: Under Siege (and it’s great!)—interrupted by another big crossover.  As always, great work from Stern and John Buscema.

What’s odd about this set-up panel is it doesn’t tell readers to go get Alpha Flight #39, which happens before Avengers #272 and is part of the Atlantis event.