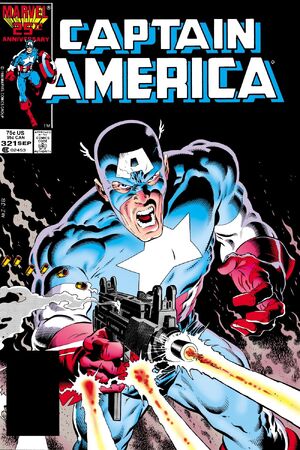 Before we talk content, let’s look at that wonderful Mike Zeck cover.

Yes, Cap does use a machine gun in this issue. And he does kill someone.  Let’s check out how that happened. It all starts with Flag Smasher’s two-tone crew using skis to hijack an airplane and kidnap all the passengers. Why they are using skis in mid air is beyond me but it’s kind of cool. Cap Learns of the hijacking on a high tech computer screen of a teenager whose mom has been hitting on Cap.  Flag Smasher says he will trade the hostages for Captain America.  Cap goes looking, there’s the big confrontation, and one of Flag Smashers men open fire on the hostages, killing several.  Captain America react quickly and… This causes Cap to get all introspective and mellow about the many deaths since issue #300.  Eventually, Captain America captures Flag smasher and hauls him across the snow while they have a philosophical conversation. And in the end, Flag Smasher escapes.

I get that this is Mark Gruenwald’s way of reconciling heroism with chilling, which was kind of a big topic in the 1980s coming off the heels of the very violent 1970s in New York City. But at the same time Captain America fight and World War II and killing really shouldn’t be this tough for him