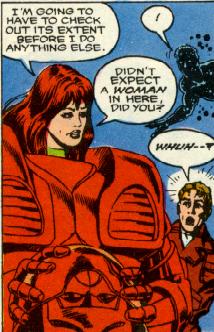 Another New Universe failure, but unlike some of the others I’m nearly certain this one isn’t part of the Marvel Universe canon because, unlike Star Brand and Nightmask, Spitfire was never heard of again.

The lead character, Dr. Jenny Swensen, created suits of armor and fought a terrorist group called The Club.  Why terrorists would pick such an unassuming, unalarming name for their organization—and one devoid of any connection to a political message—is just one of the many questions that should arise if you’re ever unfortunate enough to be stranded on a desert island with nothing to read except this book.