The issue begins with us seeing how Agent Garrett is experiencing his new, cybernetically enhanced body. Then, Agent Garrett has a very surreal meeting with Nick Fury, in which Fury orders Garret to change his report on the South American incident to leave out Elektra.  Despite her being under Fury’s protection, Garrett is now obsessed and in love, so he continues to track her—and the two appear to be developing a psychic bond.

Turns out, though, Fury was setting Garrett up to look like he was partnering with Elektra in a plot to assassinate Presidential candidate Ken Wind, who it appears has one goal when he becomes President: Nuke Russia.

Fury puts a new agent, Chastity McBride, on the case to protect Wind from Elektra and Garrett. But in the end of issue #5, Elektra escapes, Garrett is completely hers (either due to mind control or he’s just infatuated), Chastity is dead, and E&G ride off on a locomotive.

We haven’t seen Elektra having psychic powers before this series. 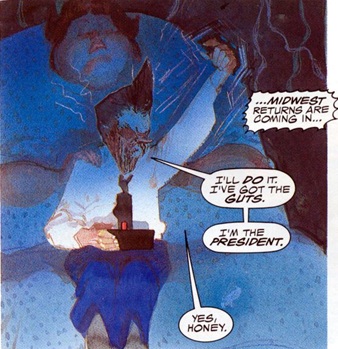 Anyway, we see the real President with his enormous wife (shades of Pink Floyd: The Wall here), cradling the button and it looks like Richard Nixon.  That would mean this story takes place before Frank Miller’s run on Daredevil, which kind of makes sense because Elektra is in red, not white.  Then again, for reasons that will be clear at the end of the series, it’s possible that this book is not canon.