Way, way back in New Mutants #6, Karma seemingly drowned after a building on the water exploded in a battle against Viper and Hydra.  We are reminded of what happened in the opening sequence to issue #32, where we also see some additional information: Cannonball did try to rescue her, but he also almost drowned because he can’t swim, and Roberto “Sunspot” Acosta saved Cannonball rather than dive deep on the chance that he might find Karma. Of course, Xi’an “Karma” Coy returned later as the leader of the Gladiators, a mutant fight club, as the host body for Amahl Farouk, aka The Shadow King.”  Oh, and she got really fat.

Now, the team is trying to rescue her.

Rescuing someone who is possessed by someone evil and who can literally possess your body, too, isn’t easy, so Magik is forced to teleport away—but her control over this ability is nowhere near perfect and she ends up time-jumping into the future where she meets her team-mates, as adults, who are now evil because Karma has possessed them (in this timeline) since the time Magik jumped away.  Magik simply jumps away again, but the very short sequence serves to remind us of what is at stake.

Eventually, Storm (who is still without her powers) comes along, with Warlock (Karma can’t possess him because he’s an alien), and the four heroes who haven’t been captured by Karma yet vow to save the rest.

All of that is just one issue.  Whew! 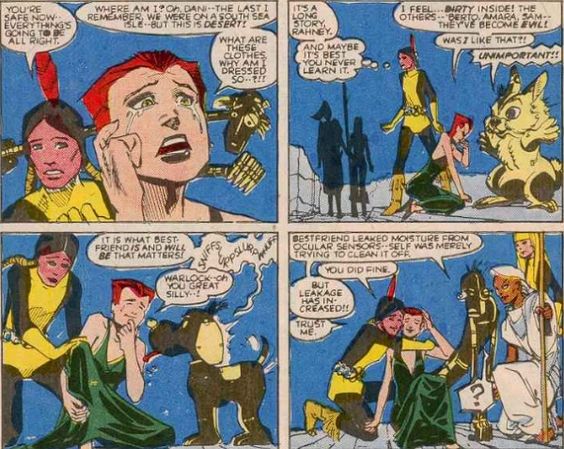 From there, we get to see the team acting evil under Karma’s thrall, which is fun.  It’s always cool seeing heroes fight heroes.

And, of course, Warlock’s infantile brain has trouble understanding why some of his friends are bad now—he’s a hard character to read about because he seems almost ridiculously powerful, like Green Lantern or Impossible Man, but he lacks the centering of a human personality (like Green Lantern) and is ten times as childish as Impy.  I mean, in just those six panels above he’s a spaceship, a chipmunk, and a faithful dog.

The resolution involves Dani and Karma having a big psychic showdown, and then Magik teleporting all her friends away so that Karma and Farouk can finally have it out in an astral, psychic battle. It’s interesting that on the Astral Plane, which is purely within the mind, Karma is still limited by her physical body.  Also, Claremont’s references to her obesity are not offensive—it makes sense that she thinks of herself as “gross,” even if that kind of discussion isn’t considered appropriate by today’s standards.  Everything Chris Claremont writes matters.  During this issue seeds are sown for several future stories, but to go into that kind of detail would take pages—you’re better off reading the books yourself.  He was such a great writer—really had clear ideas about where he wanted to go for every single character.

And a word about the art: One of the things that made New Mutants so great was the experimental, abstract art of Bill Sienkiewicz.  Well, he’s gone now, but he’s replaced by the less-abstract-but-still-very-stylized Stephen Leialoha, who Chris Claremont worked with on Spider-Woman.  Leialoha is like methadone for Sienkiewicz’s heroin: Slightly more mainstream, moving towards the middle.

Creators: Claremont and Leilaloha
Grade: A-