This is a silly issue, but it’s fun.  Peter David is writing both this book and Spectacular at the same time, so we’re getting a pretty unified vision of Spider-Man.

Former Evil Mutant, the Toad, tries to kill himself and Spider-Man saves him and says he’ll be his friend.  There’s a lot about these opening three pages that’s weird.  First of all, Toad is a pretty evil guy.  He’s tried to kill the X-Men on multiple occasions and was a very creepy stalker for Scarlet Witch.  Second, he’s Toad and he’s leaping to his death.  Third, the crowd is egging him on—showing what dicks New Yorkers can be.  And finally, it’s all treated kind of lightheartedly.  I guess in the 1980s, suicide was still funny.

And I don’t intend any of that to be critical—Peter David is one of the best writers in the business, and he makes the whole thing work.

Toad ends up with a bro-crush and wants to be Spider-Man’s sidekick, his pitch being that he can replace Black Cat.

All that alone is enough for a fun issue of Marvel Team-Up, but then Peter David adds our old friend The Spectacular Spider Kid and Leap Frog.  In the beginning, Frog and Toad are NOT friends… …But in the end they form a new team and call themselves The Misfits. 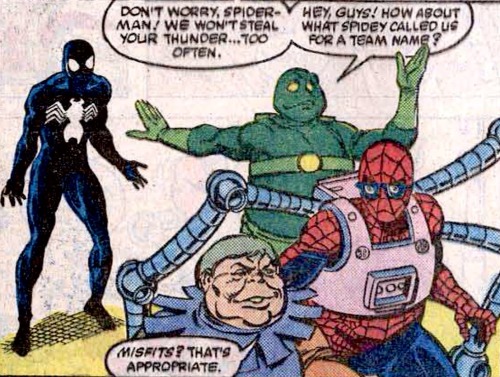 We don’t see much of them in the future.  I wish we did.