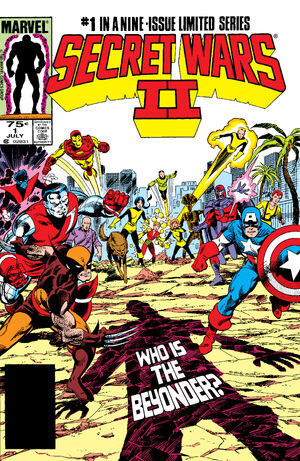 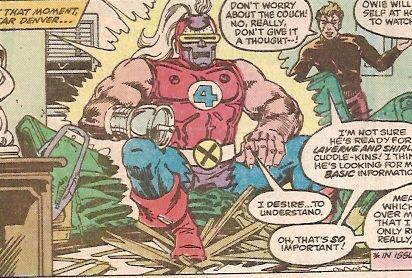 At the end of the day, Secret Wars II appears to have been two things: First, a money grab.  The first Wars was a major success, and Marvel has never, ever been a company willing to leave money on the table.

Second, SWII appears to me to be an attempt to solidify a significant culture change, wherein comic book events would be led by a miniseries and then force readers to buy other monthly titles they might not otherwise purchase via tie-ins.  Today, we take this paradigm for granted, but it really started here, with the two Secret Wars events.

The story is pretty simple.  In Secret Wars #1, The Beyonder was basically just a story catalyst: He was  a powerful force that brought everyone together so they could fight for 12 issues.  In this miniseries, he becomes a “real person” who is trying to understand what it means to be human.

His struggle is exemplified by his taking on a persona that consists of bits and pieces of people who fought in the first Wars.  The scene above takes place in Molecule Man’s living room, where he shares an apartment with Volcana.  The two of them hooked up during the first Wars. We then see Professor X identifying Beyonder’s presence, which we also saw in New Mutants #28.

It was smart of Marvel to use the mutant books to kick off this event—everyone was already reading those titles.  Getting people to buy an issue of Iron Man or Dazzler would be a harder sell.

X lets all the relevant heroes know Beyonder is on Earth.

Beyonder then gives super powers to a cartoon writer.  Seriously.  There’s no real reason for this, but then most of what Beyonder does during this series won’t make sense.  He’s a God, though, so I supposed our minds aren’t supposed to be able to comprehend his rationale or intent. In a rare political joke, the empowered character trashed Cap because Cap is a republican.  The heroes beat Thundersword by the end of the issue, which leaves us, as readers, wondering why any of this even happened.  (T-Sword returns in Iron Man #197.)