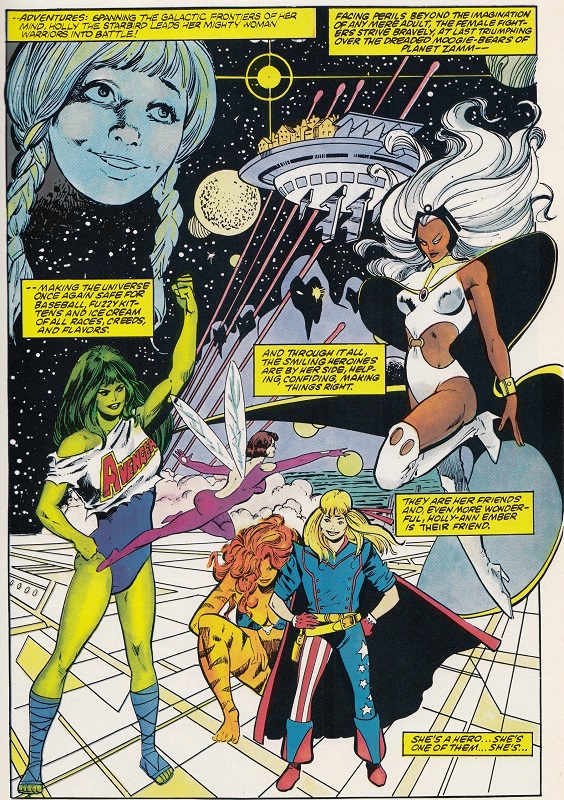 A good idea, fairly executed, with a terrible, terrible title.  Marvel’s Graphic Novel line was an one: It started with in-continuity stories about major characters, including introducing The New Mutants to the Marvel Universe, but then became a place where top creators could let their freak flags fly, putting out stuff that, frankly, really wasn’t up to snuff.  So by the time Aladdin Effect came along, you really didn’t know from one MGN to the next whether it would be something worth reading.  Given that backdrop, it’s baffling that a story starring mainstream Marvel characters wouldn’t have had a title reflecting what it was about.

Here’s the plot: AIM identifies a strange power source in a Western town, so they take theplace over and seal it off.  Gradually, the townspeople start to starve to death, and the Sheriff’s daughter, Holly-Ann Ember, who has tons of clippings about super-women, fantasizes that Storm, Wasp, She-Hulk and Tigra will come save her home town.  When she does, the heroes magically appear and do in fact save the day.

At the end, Storm gives Holly Ann a card with the X-Mansion’s address and phone number on it.

Holly Ann never appears again, though, so this may not be an in-continuity story.  I’m going to assume it is, though, because it doesn’t hurt anything.  Also, it’s a cool “girls only” issue—quite a rarity, and perhaps that’s partly why Marvel really didn’t know how to market it well.