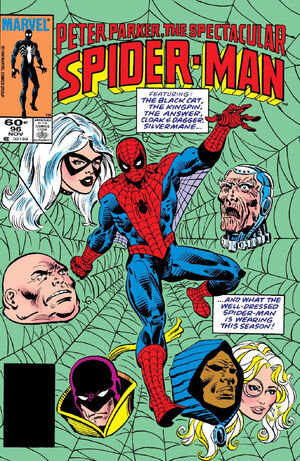 I’m not a huge fan of Al Milgrom’s run on PPTSS, but I have to admit: These are a couple of really good, really important issues.  And from here on out, his run gets much, much better than it had been.

Like most zombies, Silvermane proves very difficult to control.  He decides that he’d rather go get revenge on Spider-Man than do Kingpin’s bidding.  And he ends up getting the best of Spidey, who has to flee, injured, and go to Black Cat’s apartment to recover.  He goes to sleep and the Cat goes out to find Silvermane.  When she does, Spider-Man’s black costume (aka Venom) slides on to Peter’s sleeping body and takes him to join Black Cat.  This is the first time we see the costume having a will of its own.

The story gets even more complicated: Silverman was killed by Dagger, and now has some kind of connection to her light power, so The Answer and Kingpin are trying to hunt her down.  Kingpin hires The Rose—who I though was a Kingpin competitor—to conduct a big drug deal to lure Cloak and Dagger out of hiding.

It works, and everyone comes together for a big fight, which ends with The Answer kidnapping Dagger—she’s important because her light can control zombie Silvermane and because Answer now thinks that the light power might be able to revive Kingpin’s wife, Vanessa Fisk, who has been in a coma for years, and Cloak kidnapping Silvermane and two of Rose’s gang members. 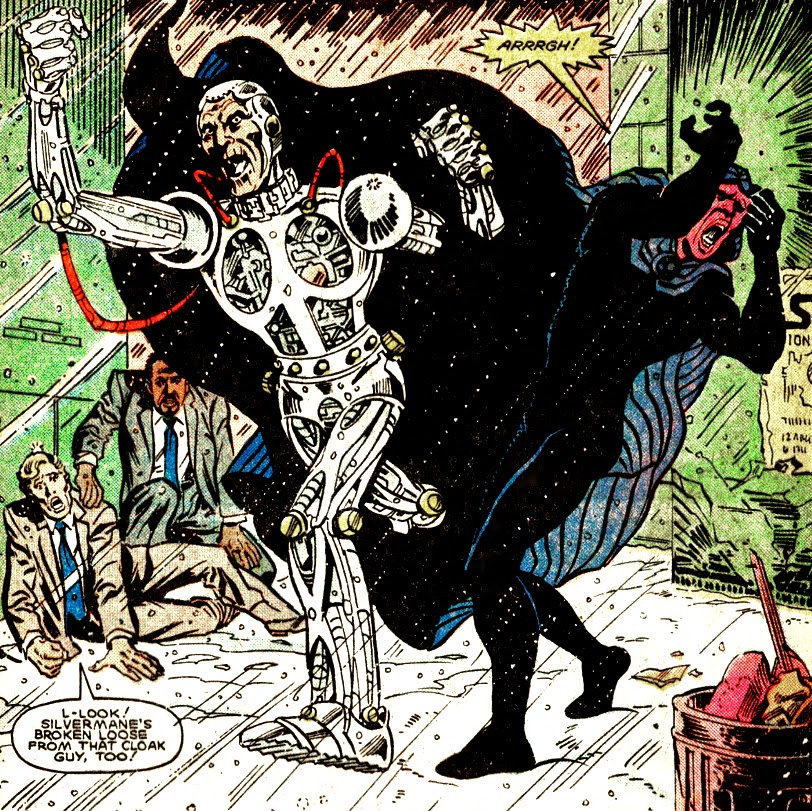 In the aftermath, Spidey and Black Cat team up to storm Kingpin’s building.  When they arrive, Silvermane is also storming the building, having broken free from Cloak’s dark dimension.  So, basically, it’s a very similar fight to the one at Rose’s drug deal, only this time Dagger is a hostage not a participant.  I’ll put my annoyance that, once again, Milgrom makes the female character a hostage, and say that other than that it’s a good battle that eventually has Kingpin going mano-a-mano with Silvermane.

He’s fighting to keep Dagger, because, like Answer, he’s convinced that she can save his wife from her coma.  But as it turns out, The Answer (whose power is that he can duplicate other peoples’ powers for short periods of time) is able to create Dagger-like light and feed it to Vanessa Fisk without relying on Dagger…

This apparently kills Answer (although he returns later)—before he can complete the process of healing Vanessa.

This is also contiguous with the Amazing Spider-Man arc where he ditches the symbiote and goes back to the old red-and-blue. 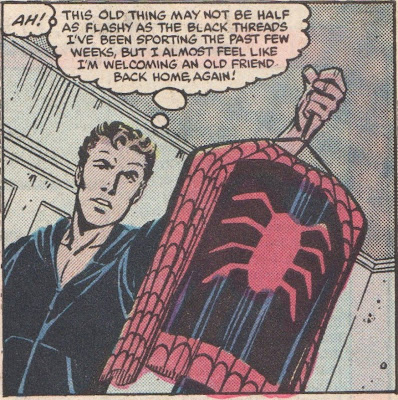 The story ends with Silvermane having his brain back and slinking away, and Cloak and Dagger fleeing the scene.

Also: A Casket of Winters tie-in.