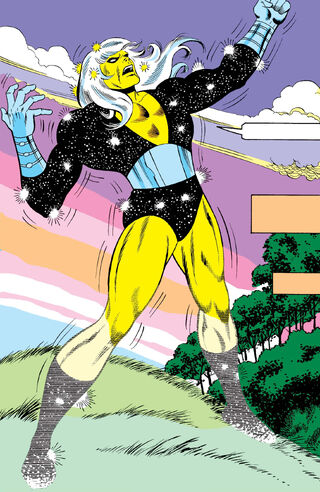 This book starts with Nebulon.  For more than three pages.  And since the creators (rightly) knew that most people would have no idea who he is, they give us a nice recap.  He’s sad because, like Silver Surfer, he’s stuck on Earth and he doesn’t like it here.  He tries to get Dr. Strange to help him, but Wong foils that effort, and then he tries The Avengers, but The Defenders try to squash that.

Nebulon isn’t really evil, he’s just a dick, but now he has a new girlfriend named Supernalia who can manipulate minds, and she’s using her powers on him to make him an even bigger dick.  She’s also using them to pit The Defenders against The Avengers.

So at least there’s an explanation why the two teams are using fists over words.

In the end, Saturnalia and Nebulon have a conversation that explains how Nebulon is banished to Earth by his culture for having committed crimes of dishonor, and Saturnalia wanted Nebulon to die so that his honor would be restored under their bizarre customs.  They realize their two positions are unresolvable, so they jump into their own “Ennui Beams” and kill themselves, choosing to die… Quite a strange story, but I’m including it because it involves the death of a recurring character. 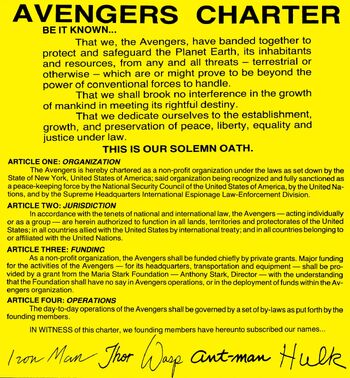 In addition, it includes the Avengers By-Laws.  I find it shocking that someone was actually paid to write this truly boring document.

Creators: J.M. DeMatteis and Al Milgrom
Grade: C+
For the complete history of the MU, year by year, go here.
And see my Ratings of Runs on comics here.