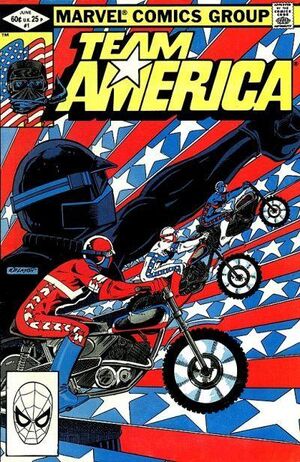 I like to think that Jim Shooter took on writing this toy-based comic because Micronauts and ROM were doing pretty well and he was jealous that a mediocre writer like Bill Mantlo could have such feathers in his cap.  Motorcycles were all the rage at this time in pop culture, so it made sense that Ideal Toys, which originally intended to license Evil Knievel (but he ended up going to jail), would start its own product line.

The basic plot is that some all-black-costumed spy biker named The Marauder busts into a CIA facility and erases five people from the Agency’s data banks.  These five are a gang of stunt bikers who Marauder then sends mysterious love letters to.  Then Hydra has a plot to kidnap a Japanese stunt biker who is touring the U.S. because he has a really nice hog. By issue #2, Shooter brought Mantlo in to try to help save this hopeless mess.  He couldn’t.  Yes, it took three big name creators to write the second issue and it was still terrible.

There’s more Hydra stuff—they’re mad that Team America foiled them in issue #1, and we meet Wrench (he fixes stuff) and Luke “Cowboy” Merriweather, who wears a hat.

And there’s something called “The Link,” which connects all the members together telepathically, only not really because they don’t seem to know each others’ thoughts or even get along well together.

I don’t remember having a single friend with a Team America toy.

Creators: Jim Shooter (writer, #1 and #2), Bill Mantlo and Denny O’Neil (also writers on #2), Mike Vosburg
Grade: F
For the complete history of the MU, year by year, go here.
And see my Ratings of Runs on comics here.