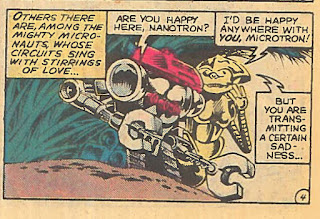 There is a love story between droids.  There’s actually a lot of interpersonal relationships in this book, but I’ve really only been covering it to the extent that it touches the greater Marvel Universe.

It’s a solidly good comic, but rarely a great one.

In this issue. Janet Van Dyne, aka The Wasp, meets the team–and really, you’d have thought that would have happened a lot sooner given the similarities between the characters.

Sadly, it’s not a great Wasp appearance.  She spends much of the time naked.