This issue starts with a (kinda sexist) love spat between Ka-Zar and Shanna.  She wants him to marry her, and he’s being an aloof belligerent man.  So she’s guy crazy and he’s kind of a jerk.  So I guess it’s offensive to both male and female stereotypes.

Moving beyond that, Shanna ends up with another tribe of people, where a male falls for her and she loves the attention so much that she thinks maybe she wants to marry him, not Ka-Zar.  Because, again, she’s a woman. Ka-Zar goes looking for her, finds her, there’s some conflict with the tribe, and eventually they both are alone, together again. 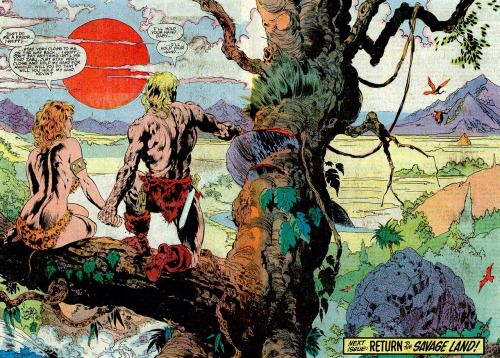 The story’s not terrible, it just doesn’t have a lot of depth to it.  It’s kinda nice to see a romance comic disguised as an adventure book.  And the art is very, very good.

Creators: Bruce Jones and Brent Anderson
Grade: C+.  A C for story, a B for art, so we meet somewhere in the middle.
For the complete history of the MU, year by year, go here.
And see my Ratings of Runs on comics here.

Ka-Zar A to Z, Marvel 1982, Shanna the She-Devil's Stories
Tweet Pin It