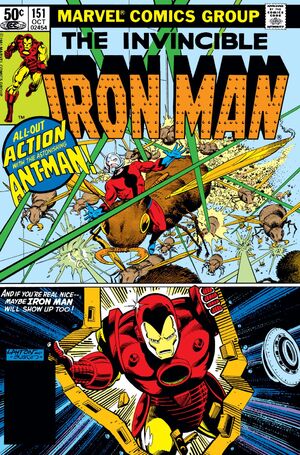 Ladies and gentlemen, Luke McDonnell.  He was a radically different Iron Man artist from Bob Layton and John Romita, Jr., who preceded him.  In many ways, his use of shadow and depth was ahead of its time and foreshadowed the styles of many of today’s popular artists.  He’s just a guest penciler here, under Layton’s inks, but Luke McDonnell will become the regular penciler for Iron Man later in the series.  He does a fill-in that’s basically just an Ant-Man story.  As the covers says, if we’re lucky, Iron Man will show up, too.

It’s a nice tale: Ant Man is fighting his way through a deathtrap while Tony Stark is out spending money and womanizing.