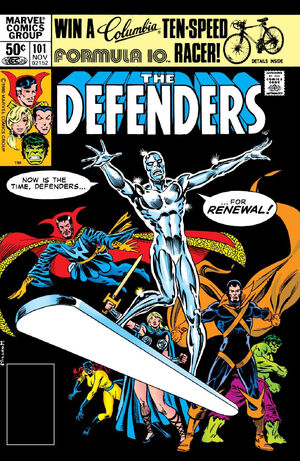 The cover to issue #101 proclaims that now is the time for renewal–and that proves to be true.  By this time, DeMatteis and Perlin are ten issues into their run, and those issues were all about the Six Fingered Hand.  Issue #101 opens with Hulk saying “We beat devils, didn’t we?  World is safe, isn’t it?”  The team is grumpy because of the literal hell they were put through in those issues, and Hulk literally storms off because nobody is being nice to him. Then, there’s a ton of character work.  And most of the key players get a turn.  All of them are trying to be happy again.  Hellcat returns the Shadow Cloak that gave her the ability to teleport back to Devil Slayer–deciding she’s had enough demon stuff for a while.  Silver Surfer gives Clea a ride on his board, all the way to Africa, where they join up with a happy, primitive tribe.  Daimon heals an old lady in the hospital, and when the children in the hospital see Gargoyle they find him cute–not ugly–which brings him joy.  Devil Slayer helps a drug addict hippie get over his heroin addiction, and then joins the team.

It’s a very nice way to bring them all together.  In fact, all seems to be going well except for Nighthawk.  They try to cure him of his daytime paralysis, but are unable to do so.

Although, there’s some sinister foreshadowing from Gargoyle.