Please forgive the horrible title of this issue.  It’s actually a good story.

Would anyone have thought that a Thing comic would produce significant events for Marvel’s cosmic universe?

In these issues, we meet the female Adam Warlock.  Fans know that Warlock was originally called Him, and he hatched from a cocoon.  This story starts with a similar cocoon being hauled out of the water by some dock workers.  A golden woman emerges from it, who calls herself Her, and she has come for Thing’s blind sculptress girlfriend, Alicia Masters.

Her does not know that Warlock is dead, and seems to think that Alicia can help her find him.  Soon after, Starhawk arrives from the 31st Century because he sensed a disturbance caused by Her.

Moondragon also sensed the disturbance, so now there’s a ton of folks at the party.  There’s lots of fighting, but Thing is mostly useless, until he performs this class act…

Yeah, I know.  It’s sexist and all that.  But to be fair, Thing also punched several women in these issues, all of whom gave as good as they got—and Her actually clobbered Thing. 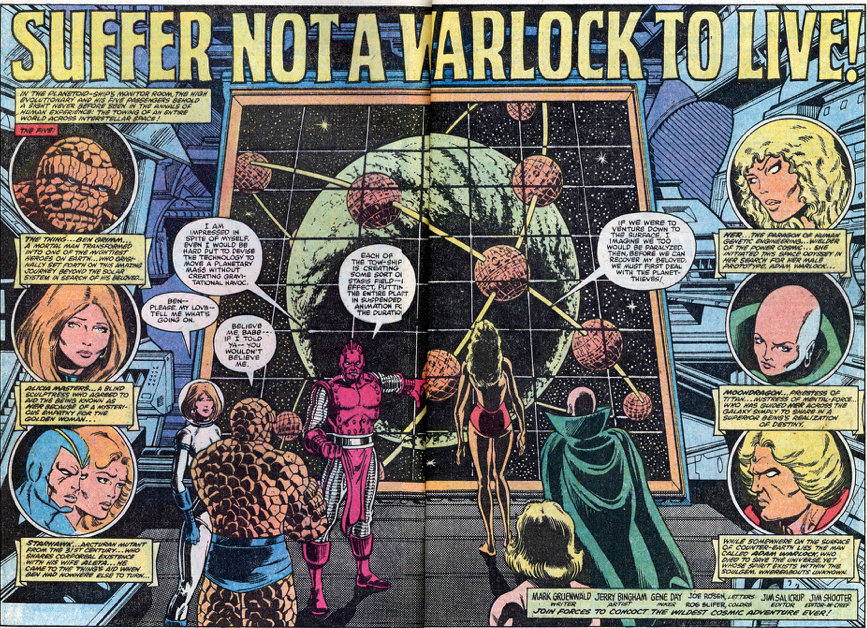 Eventually, they all go to High Evolutionary’s Counter-Earth, where Adam Warlock was buried, and he rises from the dead. No, not really.  Her just reanimates his corpse, which is kinda gross.  And also, Warlock gets title billing on issue #63 even though he isn’t alive for the entire issue.

Creators: Mark Gruenwald and Jerry Bingham
Grade: C+
For the complete history of the MU, year by year, go here.