Let’s start with that great pic of Hulk in bed. He’d rather sleep on the ground.

Hulk is still being psychoanalyzed at Hulk Base by Doc Samson, but he’s also going through a series of physical tests as well. And, of course, he outperforms the testing tools. Really, Samson, what did you think would happen? 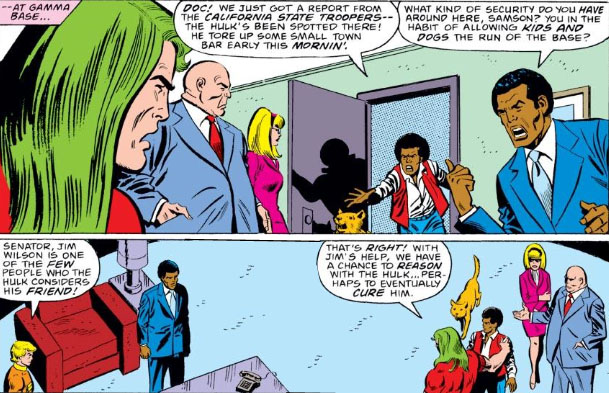 A senator stops by to visit. 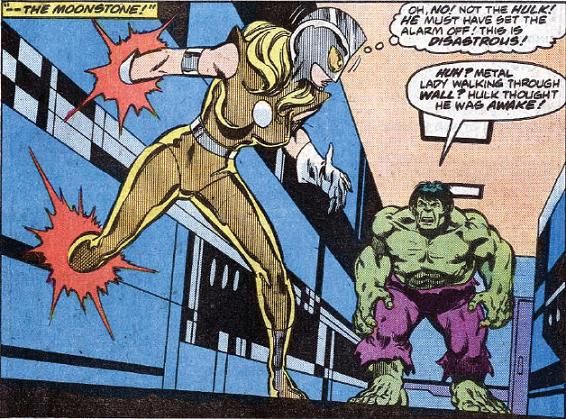 Dr. Karla Sofen shows up at the base to participate, and it turns out she is the new Moonstone. And she’s here to steal stuff on behalf of The Corporation, that murky criminal enterprise that’s been weaving in and out of Hulk and Captain America comics. Samson doesn’t know that, though—and doesn’t figure it out in these issues—so when Hulk knocks her out, Samson decides Hulk is too dangerous to study. Hulk runs off, and we’re back to the Hulk-as-fugitive status quo. It’s too bad—I could have done with several more issues of Hulk learning about himself. But back in the 1970s, Jim Shooter’s operating principle was to have quick stories, full of action and events—the opposite of decompressed storytelling. It almost like he was in a hurry to establish a huge amount of continuity. Which he did—under his reign, artists may have found creative rights to be in danger, but it was unquestionably one of the best times to be reading Marvel comics.