It was clear when it started in issue #191 that by the time the 200th issue came about, the F4 would be back together.  And who better to bring them back than Dr. Doom?  This is actually a fairly controversial story–so let’s get into a little more detail.  The three members get back together, while Reed is manipulated by Dr. Doom, using Psycho-Man’s tech, into putting on a costume-with-powers and attacking his teammates.  He calls himself, “Invincible Man.” 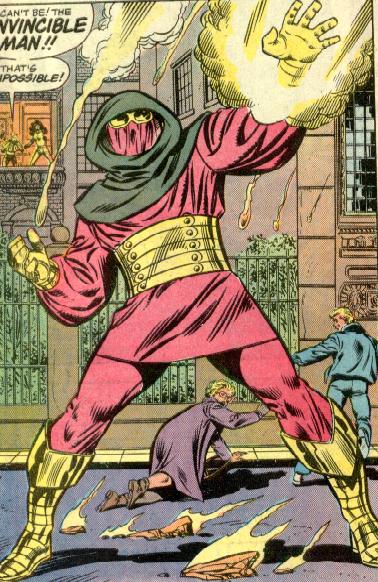 Remember, he doesn’t have his powers anymore.

In this suit, he captures all three of his teammates and gives them to Doom, and is then sent up into space to recreate the mission that gave him powers.

It works, of course.

Anyway, despite the fact that this book is supposed to be about family, it’s Johnny, Ben and Sue who come back together motivated by love and friendship.  Reed has to get his powers back before he’ll get back with them.  So, Reed is still a dick.

Reed goes on a black-op mission to Latveria to free them, where he learns that Dr. Doom has a full grown son who wants be just like the FF—so, like Reed did to himself last issue, he exposes himself to cosmic rays.  Only instead of getting one power, he gets all four.

Doom’s son has the powers of a Super Skrull!

Of course, in true Doom fashion, the boy turns on his dad.

Doom kills him, and in #200 we are treated to a truly iconic full-page panel…

And now they’re back together for issue #201!

And on top of all this: A cameo from John Wayne!

Creators: Marv Wolfman and Keith Pollard.  Interestingly enough, Keith Pollard gets “story teller” credit here—perhaps a nod to the fact that Marv Wolfman had more respect for his artists?  Or maybe it was Jim Shooter’s idea—although he was notoriously hard on talent.
Grade: B-
For the complete history of the MU, year by year, go here. 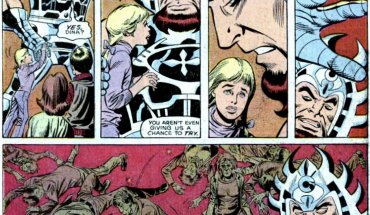