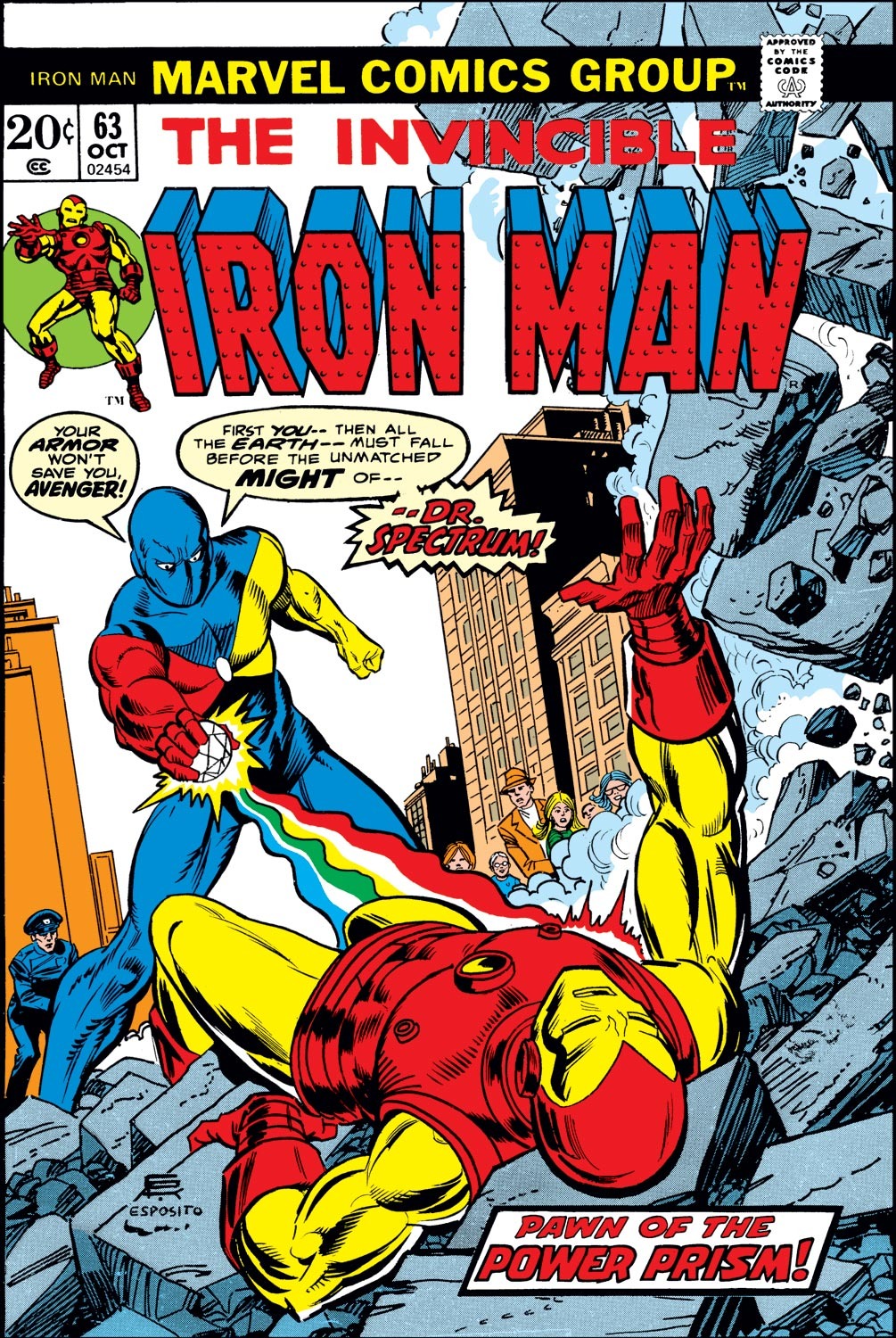 We are long overdue for a really good issue of Iron Man, and when I saw the cover with Doctor Spectrum on it, I thought we’d get it.

I was wrong.  It’s better than average, but not great.

In this issue, it’s revealed that the Squadron Sinister’s version of Green Lantern is actually an African businessman.  So good on Marvel for having a black supervillain.  But it’s too bad the story is so clumsy.  And seriously: Iron Man vs. Green Lantern shouldn’t even be a contest.  Spectrum should be able to think up a can opener and pop the top right off ol’ shellhead.

Tony Stark actually takes up as much, if not more, screentime as Iron Man.  The break up of Pepper Pott’s marriage to Happy Hogan is in full melodramatic swing, as Tony kisses Pepper just when Happy was arriving to try to work things out. In the next issue, Happy punches Tony in the face.  Also notice how Tony wears a purple suit.  Just like Bruce Banner! I love in these old comics how much people are able to say while punching/getting punched.

Also, remember that Happy knows Tony is Iron Man.  So he tells Pepper.  That’s a dick move, but Tony did totally bust up the bro-code.

The Dr. Spectrum story goes on way, way, way too long.  We also learn his origin story, which is that he is a Skrull named Krimonn who was changed into a crystal prism as punishment for attempting revolution.  He was launched into space, where he was found by someone, who we never see, referred to as “Gamesmaster.”

I’m pretty sure that’s supposed to be Grandmaster.

The gem-skrull was sent to Earth, where it was found in Africa by Dr. Obatu. It then possessed him and made him do bad stuff.  So, it turns out, he’s not a black supervillain.  He’s a victim.

Interesting idea, though, to make the Power Ring a force of evil.

Then Krimmon possesses Iron Man, and Thor shows up to fight him.

And Thor says, “I say thee nay!”  Because that’s his version of “It’s Clobberin’ Time.”

In the end, Iron Man wins by separating Doc Spectrum from his crystal, and then stepping on Krimmon.  And Dr. Obatu is really mad, and swears revenge.

So maybe he is villainous after all! Also during this issue both Happy and Eddie March (remember him, from Iron Man #21?) put on the armor for various reasons.

The last panels show the fragments of Krimmon on the ground.  Apparently, nobody thought to pick them up.  Very stupid.
Creators: Mike Friedrich and P. Craig Russell
Grade: C+