I’ve been busy.  Super busy.  So I’ve neglected spreading the word about interesting news from the business of comics.  Lots to talk about, and it’s also NYCC time so lots more coming soon.

But let’s start with the best news of all: Warren Ellis be rebooting the WildStorm Universe!  WildStorm was an imprint that started around the time when big-name creators were leaving Marvel and DC in droves to create their own titles.  This one was created by Jim Lee in 1992, and it became one of the studios that merged into today’s creator-owned label, Image Comics.  Lee found new supertalents like Marc Silvestri, J. Scott Campbell, and Whilce Portacio.  WildStorm was a such a hit that DC agreed to underwrite it in 1999, and then it transformed.  But unlike most times that a big corporation takes over a labor of love, D.C. actually made it better, and the main reason was Warren Ellis.  Ellis and John Cassaday created Planetary, which is simply one of the greatest and most imaginative comics of all time, but they also created The Authority and Stormwatch—the indie answers to the Justice League.  The books were phenomenally successful and still seem groundbreaking by today’s standards. 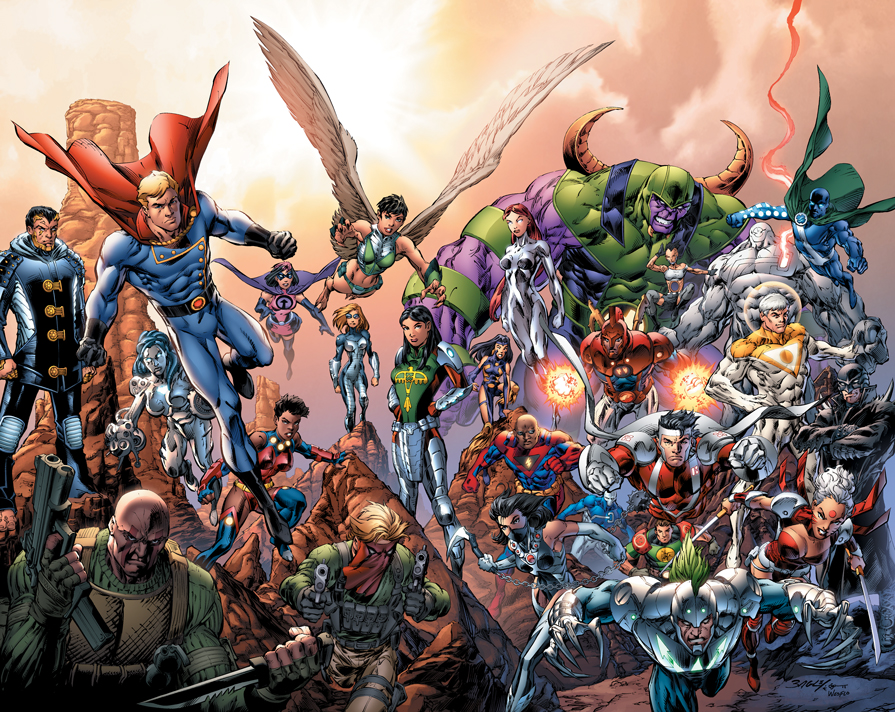 Then, in one of their many recent attempts to revive their company, Dan Didio decided it was a good idea to fold the WildStorm characters into the mainstream DC Universe.  It made no sense at all, as characters like Midnighter and Apollo were specifically created to occupy Batman- and Superman-Like spaces in a world that had no Batman or Superman.  When they’re all together, it makes no sense.  So, other than Steve Orlando writing an absolutely wonderful Midnighter solo title, the merger of the universes added nothing to the DCU and basically ruined WildStorm

But now, DC is trying to get its mojo back and they’re hoping lightning strikes twice for Ellis.  Warren Ellis recently revived Moon Knight for Marvel and did some very strong work for their Karnak character, so we’ll see if can save the WildStorm franchise—one I personally believe is beyond saving unless they completely blow up and erase the bullshit DC did during FlashDCUbirth.

Ellis and artist Jon Davis-Hunt (of the excellent Gail Simone Vertigo comic, Clean Room) will begin the effort in February, with a monthly title, “The Wild Storm,” and then Ellis will manage a line that will include characters like WildC.A.T.S., Grifter, The Engineer, Jenny Sparks…All your favorites. Solo books for Deathblow and Zealot, and a C.A.T.S. team book are promised.
And speaking of Warren, Actor Tom Hardy’s production company wants to turn Warren Ellis and Jason Howard’s Image comic, “Trees,” into a TV show. The thoughtful sci-fi book is about the lives of normal humans during what appears to be an alien invasion, but might just be alien exploration of Earth. Looks like everything is coming up Ellis!
Meanwhile, historian Joseph Hedges is close to releasing his book, “Wild Times: An Oral History of WildStorm Studios,” which is a series of interviews with key creators from the 1990s.

BETTER MOON KNIGHT?  Moon Knight has been on a roll these last few years.  First Warren Ellis and Declan Shalvey breathed new life into him as a martial arts hero, then Brian Wood and Greg Smallwood did a short stint focusing on the character’s mythological link to ancient Egypt, and now Greg Lemire—in the best major publisher work of his career—and Smallwood have been spending a while inside Moon Knight’s broken mind.  And now a roster of guest artists will be signing on—and they’re heavy hitters: James Stokoe, Francesco Francavilla and Wilfredo Torres.  If you’re not reading MK, you’re missing one of Marvel’s most interesting books.

RUNAWAYS.  Tamara Becher, who just wrote Iron Fist season one for Netflix, will now be working on the adaptation of Marvel’s Runaways comic for Hulu.  Tamara has a solid teen-show pedigree, having written scripts for the greatest TV show of all time, Buffy: The Vampire Slayer.

MARVEL DOES THE NEWS!  Marvel is best known for fists and flying, but they’ve announced a partnership with ABC News to start a digital biocomic titled Madaya Mom about a woman’s life during the Syrian Civil War.  The woman was interviewed by ABC and wrote a series of blog posts, and now Marvel will adapt them.  It sounds interesting, but I can’t help thinking it is inspired by Tom King’s incredible tale of his experience in Iraq in the Vertigo comic Sheriff of Babylon.

FOOLKILLER.  One of my favorite Steve Gerber books—and there are many because he’s awesome—was his Foolkiller miniseries, a dark and serious contemplation on media-generated psychopathology.  Since that series, Marvel has tried several times to revive the character, as a MAX (adult-oriented) ultraviolent book and more recently as part of Deadpool’s mercenary group.  All these efforts have trivialized Gerber’s legacy.  So it is with caution, but hope, that I look forward to the November reboot of the character.  My caution comes from these recent, superficial revivals.  My hope comes from the creative team.  The book will be written by Max Bemis, who did a very nice job taking a gimmicky book and making it mean something (X-Men: Worst X-Man Ever) and illustrated by Dalibor Talajic, who has never, ever let me down.

THE NEW JUSTICE LEAGUE OF AMERICA.  Steve “Midnighter” Orlando and Ivan Reis are teaming up to write the rebirth of DC’s first team-up book, and the lineup looks very interesting.  The Ray, Vixen, The Atom (Ryan Choi version), and Killer Frost are all confirmed.  The JLA relaunch will begin with a series of one shots by Orlando, Jody Houser, and others.  This could be good.  Orlando did tremendous work with Midnighter.  But it could also be like so many other promising Rebirth book.  Like, for example, this next one…

WONDER WOMAN IS A LESBIAN, AND I AM NOT PLEASED…BUT IT’S NOT LIKE WE DIDN’T ALREADY SUSPECT…

I was super-excited to see Greg “Lazarus” Rucka take on Wonder Woman gain, particularly because he gets to rebirth her and was going to focus on her origin.  But the comic is a big let down.  It’s just not that interesting.  And then he was asked in an

interview whether she is gay and he said “Yes.”  Well, then why doesn’t the comic say that?!?  Why do we learn about it a nerdnews interview?  Rucka really doesn’t seem to be putting his best work into this comic, and it makes me sad.

SUICIDE CUT WILL HAVE EXTENDED CUT IN BOTH THEATERS AND DVD.  13 more minutes.  Did you ever eat a shit sandwich and then say, “Hey, I’d like more!”

So, what do we think of that, Clint? 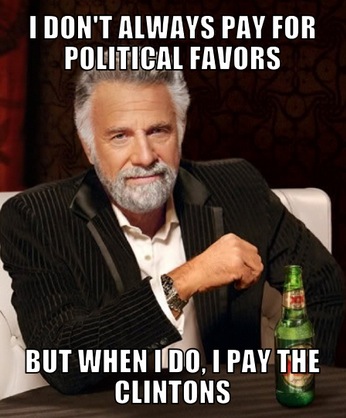 HILLARY CLINTON: THE COMIC.  The legendary Chuck “GI Joe/Punisher/Batman” Dixon has written a graphic novel titled Clinton Cash, with about a half-dozen artists, that has already become a hit—on the “real” books lists, including being #1 on the NY Times bestseller list!  It adapts the Peter Schweizer book about the influence foreign investors have had on both of the Clintons.

JEWISH COMIC-CON.  Fabrice “Spider-Man Noir” Sapolsky launches the world’s first Jewish Comic Con on November 13th in Brooklyn, just a few blocks from where I grew up on Berkeley Place.  I wish I was still in the ‘hood, ‘cause I’d definitely go!  He promises it’s not just for Jews—and has some good featured guests lined up including Danny Fingeroth, Dean Haspiel, and Josh Neufeld.

CONGRATS TO THE TICK.  Amazon Prime ordered a full season of the show (you can watch the pilot there now), which will launch in 2017.  In a rare turn, it’s actually written and produced by the creator of The Tick, Ben Edlund.

DYNAMITE’S REJUVENATION PROGRAM!  Dynamite Entertainment has done a great job with James Bond lately by giving the franchise to Warren Ellis.  Now, they’re taking on another Ian Levin character—CIA agent Felix Leiter, who will get a solo book to be written by industry veterans James Robinson and Aaron Campbell.  Dynamite also plans to bring back KISS (yes, the comic about the band), to be written by Amy Chu and Erik Burnham, and John Carter of Mars to be written by one of the industry’s best writers, Brian “DMZ and The Massive” Wood.  Also, Mighty Mouse is joining the publisher’s lineup, as are the three comely witches from the TV show Charmed.

AMERICAN GODS.  Neil Gaiman’s epic novel is being adapted for TV by Starz, so it’s seem appropriate that Dark Horse is also going to turn it into a comic.  It will take two and half years to tell the complex tail, and it will be done by P. Craig Russell, Scott Hampton, David Mack, Dave McKean, Walt Simonson, Mark Buckingham, Glen Fabry, Adam Brown, Colleen Doran…Lots of talent, and expectations are high.
Comic Book News
Tweet Pin It