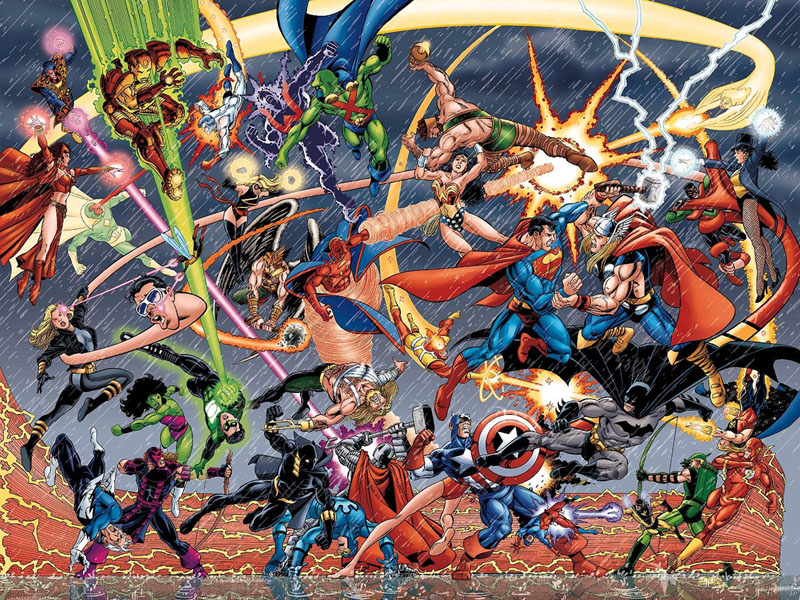 Remember Avengers vs. JLA, the wonderful miniseries with incredible art by George Perez and written as well as it needed to be by Kurt Busiek? Well that wasn’t the first time the heroes met. It started innocent enough, and entirely in another comic. In a 1972 issue of Marvel’s Amazing Adventures, Steve Englehart and Bob Brown put Englehart himself, Len Wein, Wein’s wife Glynis (a comic book color artist), and Gerry Conway in a car driving to the Rutland Parade. We get to see the Parade in JLA #103.  And look closely at the lower left edge of the panel–on the float behind the one the Justice League is riding on…

Yeah. Marvel heroes! In a DC Comic! It blows the mind. And then, the fighting starts.  Here’s Spidey vs. Green Lantern and Batman… It actually continues from there, into Gerry Conway’s Thor #207 (art by John Buscema), where the three creators appear again at the parade and lo! in the background it’s Batman and Superman.

This was back before the days of exclusive contracts, when creators could just have fun with each other and it wasn’t all so formal.

A Panel From Every Issue of JLA, Comic Book Publishers Crossing Over, Rutland Parade, The Avengers (Complete Series)
Tweet Pin It