Of all the AL,AD books, the Avengers lineup is probably the most different. As much as I bellyached about it, the pre-Secret Wars Avengers roster was fairly strong…

Of those seven books, one was one of the best Avengers books ever (Secret Avengers), Hickman’s two were a little plodding but consistently interesting and definitely “big” enough to be worthy of the Avengers titles, and the black Avengers book wasn’t always good, but wasn’t ever terrible. Then there was the Remender book that never seemed to make sense and the Avengers World book that was more superfluous than bad. And as for Ultimates, well, there was a reason Galactus came to U-Earth and didn’t finish his meal. Ugh.
After the AL,AD change, you’re looking at fewer books (five vs. six), and one of

them doesn’t even have Avengers in the title. Here’s the lineup:

So are you better off? You’re losing Hickman to Waid, which should be a fair trade. Even two Hickman books for one Waid book, because nothing happens in Hickman books but Waid keeps the action coming. The problem is, AN,AD Avengers hasn’t really gelled yet. Maybe it’s because the team is forming, or maybe it’s because Mark Waid is much

better at writing characters than groups. I can’t tell yet, so the jury is out. Al Ewing lost one but gained another, so that’s a fairly even swap. Bad Rick Remender is boring but bad Gerry Duggan is awful, so I think we lost (but just a little) on the Uncanny title. The Ultimates were bad before Secret Wars because they felt thrown together and irrelevant, and what you’ve gotten is a Hickmanesque attempt to be cosmically important. So you’ve gained in size but quality? Well, let’s just say if you’re into size you’re a little happier.

A-Force is the most promising change, but it doesn’t make up for the loss of Secret Avengers, which was the most fun I’ve had reading comics in years. I’m gonna say Avengers fans are worse off after Secret Wars—not by a lot, but by enough that my regular reading has dropped from four books to two. And if AN,AD doesn’t get better soon, I’ll be down to one: A Force.
I think for a guy who has read every issue of The Avengers to be down to one or two books on my pull list says something serious.

Also of note, even if they’re not true Avengers books, S.H.I.E.L.D. will be replaced by Agents of S.H.I.E.L.D. because, hey, TV sells comics, and supplemented by Howling Commandos of S.H.I.E.L.D. I won’t read the former (not interested) and tried the latter. Extremely disappointed. 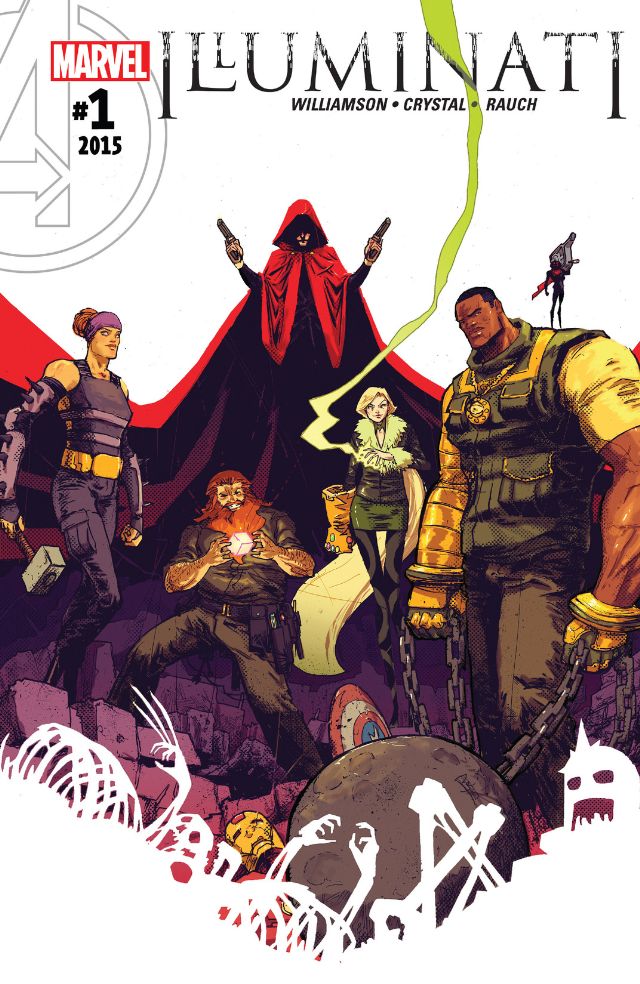 I was also very disappointed by the new Contest of Champions book, which just feels…Pointless.

But I have enjoyed the first few issues of Illuminati, written by Josh Williamson—a really fantastic comic writer—and illustrated by Shawn Crystal. It looks like it will be kind of a Dark Avengers type story.

And finally, Marvel’s fake Justice League gets their own book: Squadron Supreme by James Robinson and Leonard Kirk. Robinson is one of those writers where I either love what he’s doing (like Starman for DC and last year’s Airboy for Image) or I hate it. The Secret Wars tie-in for SS was good—so I’m hopeful.
Hit next for the Spideyverse!