The first arc of the Bendis and Maleev run introduces the Machiavellian Sammy Silke, and, more importantly, establishes the look and feel of one of comics most distinctive takes on a corporate character.  Everyone knows Bendis: Lots of dialog, lots of sidetracks and character moments that don’t add to the overall plot but make the story seem grounded in “reality.”  Maleev adds texture, atmosphere, and reality by using photorealistic backgrounds and pervasive, heavy darkness. All of the major themes of the team’s multi-year run are introduced: identity and privacy; the power vacuum left by the departure of Wilson Fiske; and the time-hopping style. You can’t casually read this. You have to pay attention. There are so many great Frank Miller stories about Daredevil.  And when you’re looking for a  one-off, do you go with Stilt-Man?  The classic “Roulette” story in #191 (which CBSBG placed at #19)?  Maybe.  But I go for this issue, wherein Foggy Nelson takes over as narrator; Turk tries to become a powerbroker; Foggy faces down Wilson Fisk; and all the while Daredevil works in the background to protect Foggy from his own hubris.  This issue is tailor-made for a TV adaptation, and I kept hoping I’d see it on the Netflix show. When I did my original top 20, I hadn’t been able to dig into Ann Nocenti’s Daredevil work.  And I do mean “dig in.”  It’s very personal, very different, and sometimes very obtuse.  Lots of people dislike it, but if you read it years ago—before comics as an art form made their big shifts in the 2000s—give it another try.  And start with these issues, because they’re the most accessible of her run.  In this story, Murdock meets a schizophrenic, pyrokinetic mutant who knows karate and has been hired by Kingpin to kill Daredevil.  She’s like Elektra in many ways (yes, they fall in love), but so much more full of crazy.  There’s a reason why she’s a fan-favorite villain, and this is it.

The two iconic covers–#183 (Punisher shooting Daredevil in the belly) and #184 (DD aiming pistol at the reader with “No More Mister Nice Guy” in huge capital letters)—announced immediately that this was not going to be your every day Daredevil story. Even by Miller/Janson standards, this is pure gold. The story—about kids using PCP—could easily have come off as a morality play, like an afterschool special, but it was handled without condescension. Punisher was a perfect foil for Matt Murdock, particularly in retrospect–knowing where Miller (then Bendis, then Brubaker, then Diggle) would take the character later–and their rooftop dialog on whether justice requires death or prison, is startlingly prescient. (Note: I’m not the only one to respect these covers–#183 was picked as the second-best DD cover of all time here!) Mark Waid and Chris Samnee are finishing their run on The Man Without Fear, but it is shaping up to be one of the best runs with the character.  In fact, I’d put it at #2—right behind Frank Miller’s work.  Issue #14 may seem like a strange one to put on my list, as it is in the middle of a very strange arc involving The Owl and The Shroud, but it exemplifies the joy of this run.  Daredevil is so happy being Matt Murdock (and vice-versa), that he even appears in court in a dashing red suit!  We’ve never seen DD this happy. 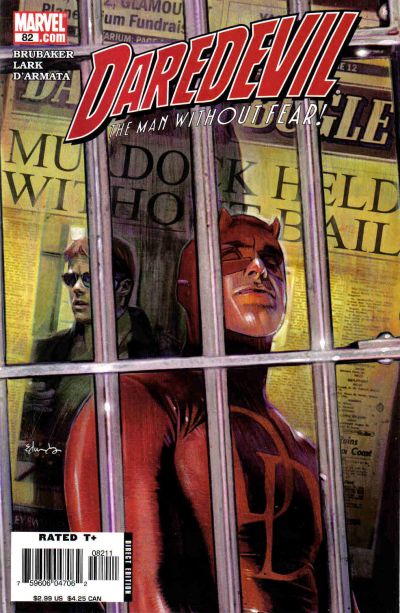 No.  We’ve never seen ANY superhero this happy.  This is the guy we all wanted to be when we were seven and tied a towel around our neck, prending to be superheroes.  A perfect comic book.

This was Ed Brubaker and Michael Lark’s first DD story (they’d previously worked together on the Noir-ish, amazing, Gotham Central series for DC), and Bendis had really left them in a pickle, with Matt’s secret identity revealed, and the character in prison. The team showed how Matt navigates the dark world, where he’s locked in with all of his enemies. Plus, it’s got 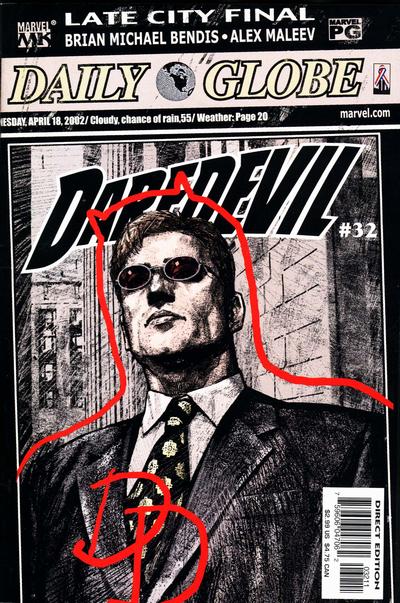 Note: This is sold in trade as The Devil Inside and Out Volume 1.

They say nothing changes in the corporate comic book world, and it’s generally true.  Like when Spider-Man revealed his secret identity to the world, Marvel erased that past from everyone’s memory.  But when Bendis and Maleev exposed Matt Murdock as Daredevil, it stuck.  In fact, Mark Waid is doing brilliant work with the ramifications in the current storyline—as you have already seen in this very list. Back before Jeph Loeb became a Buckheimer hack, he used to be able to write characters. Daredevil: Yellow was part of Loeb’s terrific “color” series, in which Loeb, with the amazing art of Tim Sale, reexamined the motivations for Marvel’s main characters (if you haven’t read Hulk: Grey, do it now). He retold their origins, but from a modern perspective. Here, Daredevil struggles to come to terms with the death of Karen Page. In so doing, Loeb shows how Daredevil went from his generic Silver Age persona to a darker character, more willing to tread the edges of justice. There are few artists whose work alone will make me buy a book, regardless of the content or author, but Sale is one of them.

CBSBG mushed together what it called “The Elektra Saga” to include issues #168 and 174-182.  And those are all good comics.  But I think these three issues stand alone, perhaps with 182 as a coda (it deals with Matt grieving the loss of Elektra).  And frankly, if you’re going to group together the “saga” you really have to include #190, her rebirth.  So my list is better than theirs.

But one thing’s for sure: These are some of the most iconic comics ever created, with images that are reproduced and discussed today—35 years after they were created.  And people still argue whether Daredevil intentionally let go of Bullseye or lost his grip, precipitating his arch-enemy’s crippling fall to the pavement below.  Go back and read it again.  It’s as ambiguous as whether Spidey awkwardly catching Gwen Stacy broke her neck, or if it was already broken and he didn’t kill her after all. Honestly, I don’t know what I was thinking last time not making this #1.  It’s clearly the best.  So much has been written about it that if you don’t know what it is, you’re just not a comic book fan.  ‘Nuff said.