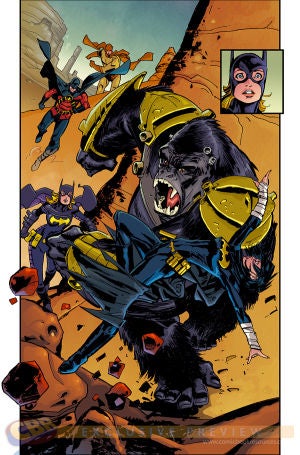 DC’s “new 52” gamble about 4 years ago paid off big for the publisher…For about 6 months.  Then their sales gradually slid to a level that was not only below Marvel but below where they were prior to the new 52.  And it looks like the readers they lost have all started buying Image Comics.

But if at first you don’t succeed…Do it again.

The main complain about DC’s line-wide reboot was that everything that came before it no longer mattered, and to fans of continuity, that was sacrilege.  And to fans of superheroes in general, it was confusing; particularly because the reboot happened right in the middle of Grant Morrison’s 5-year love letter to Batman, and the reboot completely screwed up the final chapter.

After the reboot, DC set about redefining their universe by starting things off years after the reboot and then time-jumping forwards and back to re-establish the decades of continuity that were well-established before the reboot.  Strange behavior.  And then the publisher piled so many events on top of each other that casual DC fans like myself couldn’t keep track of anything, and therefore I dropped everything.  The only books I read from new 52 with any regularity were Wonder Woman (which was self-contained), Batman (which was also

kept immune from all the events and wars and stuff), and the Superman reboot (which was designed to bring new readers aboard).  I picked up Secret Six #1, and liked it, but now I’m starting to wonder if I should have bothered.  Why?  Because Gail Simone’s last, extraordinary run on Secret Six was cut short and bollixed up by the new 52 and now…

By now, everyone knows that DC’s 2015 event, titled “Convergence,” will reboot the DCU again.  So does anything I’m reading now even matter?

Worse still, they’re piling on the events.  The long-hyped “Darkseid War” will begin in March with Justice League #40, right on the heels of the Convergence event.  If everything matters, nothing matters.  But the fact that JL won’t reset its numbering means that Convergence won’t be the complete reboot everyone thought it would be.  In fact, it seems like the event might just be an excuse to clean house.

DC will be cancelling no less than 13 series, including all their weekly titles, three Green Lantern spin-offs, Swamp Thing, Batwoman, Infinity Man and the Forever People, Secret Origins, Star Spangled War Stories Featuring G.I. Zombie, Trinity of Sin, Worlds’ Finest, Arkham Manor, Aquaman and the Others, and Klarion.  Most of these books have suffered from low sales, so I guess instead of just killing off the poor performers, they’re making a big event party out of it.

What this means long term is hard to say, but short-term, the publisher just axed about a third of its monthly titles.

The real question is: Will anyone notice?