I’ve read every single issue of The Fantastic Four ever written (before 2014), so that must make me an expert on something, right?  And Dr. Doom is their main villain.  In a lot of ways, he’s their only villain (unless you count Galactus, but he’s more of a problem than a villain, like tidal waves or lactose intolerance).  Doom is the greatest villain ever, and if you doubt me, here’s ten reasons why. 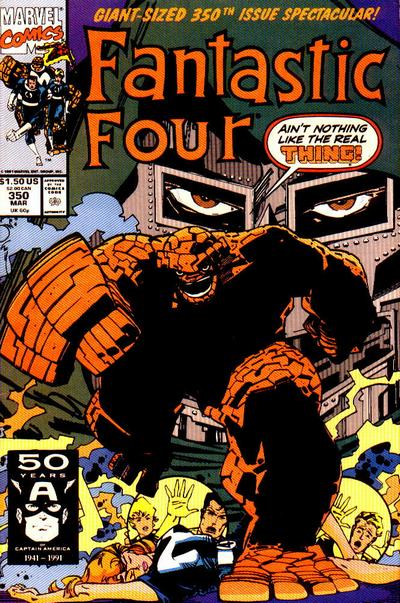 Separated by a Godawful filler issue, these two issues may be more of a great Walt Simonson book than a Doom one, but I’m including them on my list because they show how great his run on the title really was.  I’ve made the argument before that his run is one of the best of all time but most people don’t even remember it.  Issue #352 in particular uses the comic book medium to its fullest potential, incorporating the cover of the book into the main story, which is told through time jumps and skips that reward close reads and re-reads.  If you’ve never read it, go find a copy.

In terms of the Dr. Doom legend, it doesn’t move the ball forward a lot, but he’s a cracking good villain and given his obsession with controlling reality and controlling time, he’s a fitting enemy for a story like this.

Brian Michael Bendis wrote the hell out of the Avengers back in the mid-2000s, and some of his best work was with Mark Bagley on Mighty Avengers.  In these three issues, the team believes Dr. Doom is responsible for dropping a symbiote bomb on New York City, so they travel to Latveria to bring him to justice.  In the process, they have to go back in time (an essential element, it seems, to just about any great Doom story), they get tricked by Dr. Doom repeatedly, and Sentry rips off Doom’s armor.

Mark Waid’s run on Fantastic Four is highly underrated and underdiscussed.  As someone who has read every single issue of the Fantastic Four (except for the Mark Millar run), I can tell you that these five issues (the final one is renumbered as #500) show Dr. Doom at his absolute most vile.  It tells of his attempt to become a master of the dark mystical arts, giving up things like true love that might have made him less of a fascist or softened him.  It also shows Mr. Fantastic as someone limited by his own intellect, which is unable to comprehend the miraculous/unscientific world of magic.

Why is Doom so bad in this one?  Well, without giving away the horror of it (and this is truly a horrifying comic), it involves children.  And it gave me the chills the first time I read it. Hailed by many as Roger Stern’s greatest script ever (and that’s saying something, since he’s probably one of the ten best writers of all time), this graphic novel brought together Doom, Strange, and artists Mike Mignola and Mark Badger in a search for Doom’s momma.

The fact that a guy who constantly feels the need to take over the world and destroy his sibling stand-in also has mommy issues should be no surprise to anyone, but few writers ever dealt with this aspect of Doom’s past.  And fewer still ever dealt with it in any kind of meaningful way.  This was comics as literature, truly, even down to the format: It was really a graphic novel, not just a bound collection of single issues (which is what the kids these days call a graphic novel).  As such, the story could flow with a single beginning, middle and end—not a series of cliff-hanger chapters.

The book came about after the first Marvel graphic novel, Jim Starlin’s The Death of Captain Marvel, was a huge success—and it almost never came to be.  Stern sold the idea to Marvel back when he was writing Avengers and was solidly a friend of Jim Shooter.  About five years later, Stern had been fired by Marvel but the company still had agreed to pay him to write the story.  Once Mignola was attached to do the art, Marvel let it run forward.  As far as I know, it’s still out of print.

The one where Doom steals the power cosmic from Silver Surfer.  The book suffers a little from the bombast and dialog-heavy storytelling techniques of the time, but the plot and the concepts are evergreen.  Doom stealing power that doesn’t belong to him is a major element in many of the stories on this list.  It is a human truth that envy and ego are inextricably intertwined.  I loved this story!

Under the brilliant guidance of Jonathan Hickman, Doctor Doom joins the Future Foundation.  Sort of.  What’s really going on is that he’s got a brain tumor and Valeria Richards agrees to help cure him if he agrees to help her dad figure out the problem of the week.

This is a rare example of Doom being humble, and it’s fitting that it happens at the hands of a child. 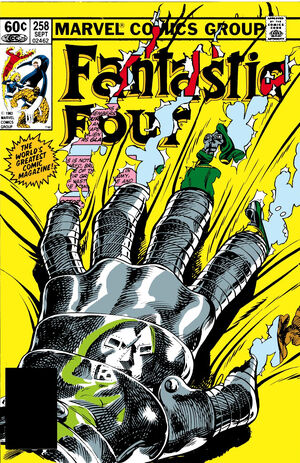 Terrax the Tamer was a wicked cool Galactus herald.  And that’s just one reason why these three issues are among the best of John Byrne’s epic run on Fantastic Four.  The other reasons are all Doom.  In #258, titled “Interlude,” we see essentially a day in the life of Dr. Doom in Latveria.  It shows him governing the town, and emphasizes that Doom isn’t just a power-hungry super-villain like so many others, he’s actually a politician.  But he has a goal, and Tyros (formerly Terrax) shares that goal: Revenge on Mr. Fantastic.

The two issues that follow present Doom as a mastermind, who pits Tyros against the foursome, but in the end, when he realizes that Reed Richards isn’t even showing up to the battle, he’d rather literally sacrifice his own body than forego the chance for revenge.

All that plus Silver Surfer!

When we first met Victor Von Doom, he sent the Fantastic Four back in time to get Blackbeard’s treasure.  That’s Doom in  a nutshell: He doesn’t care what it takes to get what he wants, time, Gods, whatever will not stand in his way.  In this adventure, Doom wants his mommy.  No joke.  He wants his mommy and the ancient sorceress Morgana Lefay appears to have the ability to free Doom’s mom from Hell.

So this adventure, pitting Iron Man against Doom back in the days of Camelot, not only makes sense, it’s perfect.  It also comes from one of the best—if not the absolute best—Iron Man creative teams of all time: Bob Layton, David Michelinie, and John Romita Jr.

Yes, Marvel’s first major “event” series was really about bringing every single major Marvel character into a single story and letting them throw punches for solid year (and giving Spider-Man a black costume).   But in terms of story, it was all about Doom.  I won’t even bother to say “spoiler alert” because if you’re reading this article then you’ve probably read Secret Wars already at least twice, but Doom almost (but not quite) defeats the most powerful entity in the universe, mostly just by bragging a bunch and trash talking.

Not only is this obviously the best Dr. Doom comic of all time, it’s one of the best comic books of all time starring anyone.  Period.  It’s perfectly constructed, with four distinct acts; it has a present-time story and a time-travel sub-adventure; it has pirates, gadgets, and way out there wildness; and it introduces one of the most recognizable villains in comic book history.

Why else is this one of my favorite comics of all time?  Because it has all the ridiculousness of early Marvel comics.  Stan Lee’s dialog (or maybe it was Jack Kirby’s—it’s hard to know) is stilted and overly verbose, but with a character like Doctor Doom that works.  He refers to himself in the third person.  In fact, he does it on page one, where he says that the Fantastic Four “are naught but pawns of Doom!”  He’s a king (although it’s not clear what of—Latveria is not mentioned), and he acts like one.  Marvel’s approach to comic books was to make the characters identifiable and familiar, so Peter Parker was a high school nerd with relationship problems and The Thing was insecure about his appearance.  But Doom was the complete opposite.  In fact, I if you relate to him, there’s probably something wrong with you.

The book also mixed sorcery and science.  Jack Kirby was a known sci-fi fan, but here we had a guy who used a jet pack, magic, and a time machine.  All in one.  Very cool.

But most of all, this is the first Marvel superhero time travel travel story, and they do things like worry about the timestream in it, and yet Doom—who has the brains and resources to build a working time machine—only wants to use it for petty theft: To steal Blackbeard’s treasure.