Only one story of note: CAPTAIN AMERICA: WINTER SOLDIER.

I saw it. It’s great. I’m not spoiling a damn thing. No other news needed. But if you’re interested….

THE TRIAL OF JEAN GREY. This crossover between Bendis’ X-Men books and Guardians of the Galaxy book was a real head-scratcher. It seemed to really be building to something, but that “something” ended up being…Conversation. If I want to see people talking out their problems, I’ll go back to Kindergarten. This is a comic. Gimme some explosions. Bendis’ work since he ditched the Avengers for mutant titles has been…Less good. I like his GotG comic, but I can’t say any of it has approached the excellence of his first three years with the Avengers titles. It all feels…Safe. And corporate. Like so much at Marvel these days. Even their “new” fascination with character-driven copies of Hawkeye (see, e.g., She Hulk, Black Widow) feels formulaic. It might be time for a new Editor-in-Chief to shake things up and remind us why Marvel is the best at what it does best and what it does best is capes and spandex.

HARLEY QUINN INVADES SAN DIEGO COMIC CON. This is an actual comic, coming in July, in which Harley Quinn invades SDCC. Because one Deadpool isn’t enough, you gotta have a DC one.

BODIES. A new Vertigo series written by Si Spencer and coming in July will look at four murder mysteries from four different eras (19th century, WW2, the present, and the future). Each story will be by a different artist, and all four stories will be developed in each of the eight issues of the series. Obviously, there’s a supernatural element to it all (based on Spencer’s past writings, which include Hellblazer).

GROOT THE MOVIE. Marvel Studios is drafting a sketch for releases through 2028, including tentative plans for spin-offs for every member of the Guardians of the Galaxy. Of course, if the movie tanks those plans will be dead. And speaking of dead, I may not even be alive in 2028, so if they’re gonna do a Moon Knight movie, I hope it’s soon.

DEATHLOK. And speaking of spin offs, Marvel’s SHIELD TV show features Deathlok in a prominent role. Well, now he’ll be getting his own comic book. He hasn’t been a headliner in almost a decade. No word on whether this Deathlok, like the Ultimate Nick Fury who served as the blueprint for movie Fury who led to a new 616 Fury, will be black like J. August Richards. (That’s a reference to the old book, “Black Like Me,” for those who didn’t catch it, in which a white guy goes undercover as a black guy.) It will spin off of the Original Sin event, which features a subplot about a Deathlok to be written/drawn by Nathan Edmondson/Mike Perkins.  And in other “Agents” news…

AGENTS OF S.H.I.E.L.D. You can’t say they aren’t trying to listen to fan complaints: Deathlok is getting cooler and they’ll be introducing Blackout. No, not the Ghost Rider villain, the one from Nova #19 who ended up being part of the Masters of Evil in the great storyline about the siege on Avengers mansion. You know, the guy with half an Electro costume. I’m sure he won’t wear that on the show.

FABLES. Bill Willingham’s long-running, critically acclaimed Vertigo series will be ending with #150.
And with that, I’ll wrap for the week.

HIP HOP FAMILY TREE. Dunno how many of you have checked out Ed Piskor’s comic book history of rap music, but it’s really cool. It’s also sold out several printings. Fantagraphics plans to do a boxed set something this year. 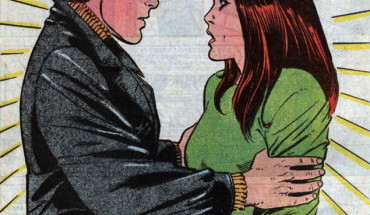