In 2009, Marvel turned it’s “Marvel Universe” version of Punisher over to relative newcomer Rick Remender.  He’d been writing comics for Image and Dark Horse, and was best known for Fear Agent and Strange Girl, but he’d never handled a major character for the big two before.

He started working with Frank Castle as a co-writer, with Matt Fraction. of Punisher War Journal.  When Fraction moved on, they gave Remender his own Punisher book–right at the start of Dark Reign–and he wasnted no time enmeshing the character in the Marvel Universe.

Right after that, Castle broke into a SHIELD hideout and got himself some contraband weapons from many major Marvel players.

Genius.  Let Marvel’s most morally obscure hero play with some of its most powerful toys.  It immediately made readers sit up and take note.

No one had thought to do this before.

Of course, what Remender’s run is best known for is letting Punisher get hacked to bits by Dark Wolverine, and having the Legion of Monsters sew him back together as a badass Frankenstein character.

Nobody ever thought to do that before, either.

It was instantly polarizing.  I called it one of the best Punisher stories of all time.  In defense of the concept, it’s a frikkin’ comic book.  A super-hero comic book.  It’s supposed to be wild and crazy.  Christ, Garth Ennis’ Marvel Universe Punisher (as opposed to his grittier, adult-oriented Punisher MAX) ran over Wolverine with a steamroller and fought a polar bear.  Was FrankenCastle that much sillier?

On re-reading the book for this post, I did find it dragged a bit.  That’s a major flaw in all of Rick Remender’s writing.  He’s too heavy on internal thought and exposition (see, e.g., his work on Venom), and he doesn’t have a great sense of pacing (see Uncanny X-Force).  But his ideas are creative and fresh, and his sense of his characters is deep.  Punisher “made sense.”

And when he went after Dakken to get his revenge, the result was four-issues of nonstop combat.

After this, Remender went on to write a gritty epilogue miniseries called “In the Blood,” which was radically different from his Punisher saga in that it focused on street-level crime and didn’t incorporate the super/larger-than-life elements of his Punisher run.  I recommend that one, too.

You can get it all in an oversized Omnibus for $70, which is a great showcase for the artwork by Jerome Opena, Tony Moore, John Romita, Jr., and others. 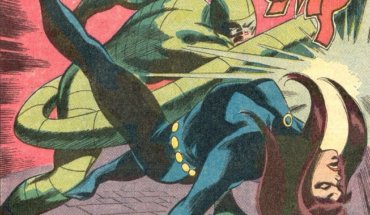