Home
Earth's Mightiest
COMIC BOOK NEWS
Yes, I’ve been neglecting news for a while due to the slow news cycle at the end of January, being horrendously busy at my paying job, and having the flu (arg!).  But I’m back, with news about a new Brian Wood Marvel comic, X-movies, and more…But first: I can’t wait for this one.  Ethan and Malachai Nicolle’s Axe Cop is a bizarre free-for-all action comic that begs—nay, demands!—to be televised.  It will arrive on Fox on July 27th at 11 at night, with voice work from Nick Offerman, Megan Mullally, Patton Oswalt, Ken Marino and Tyler the Creator.

Now, hit the break for more. 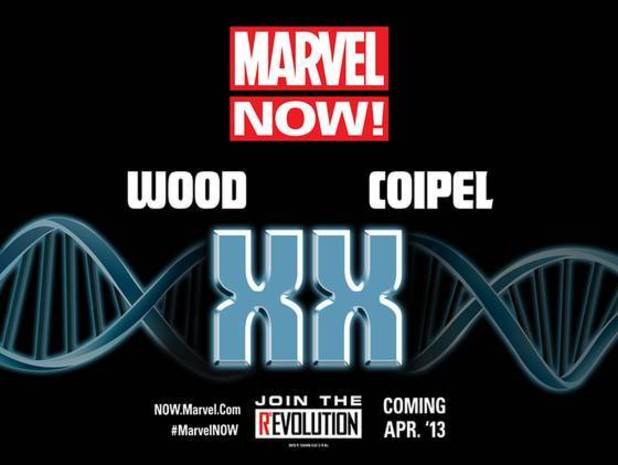 NEW BRIAN WOOD MARVEL CHI-X COMIC. The promo teaser said “XX”, but like “Chi-X” better.  Storm, Rogue,Kitty, Psylocke, Rachel Grey, and the always lame Jubilee.  I’ll read anything by the author of The Massive and Saga, but team him up with Olivier Coipel and…Wow.

CHEW ON SHOWTIME.  Comic creator Rob Guillory has seen the script and says it’s “shockingly loyal to the comic.”  I did like the first story arc of this comic, about a food cop (in a world where it’s illegal to eat chicken) who gets a psychic read on anything he eats, but I got a little tired of it after that.  Still, it could be a good show.
SUPERMAN: UNBOUND.  And speaking of cartoons, Superman: Unbound should arise from WB Animation this Spring.  I thought they weren’t doing more movies, but apparently they are.  This one is based on Geoff Johns’ Brainiac story.  I have to say, the last Superman movie kind of sucked.  And I wasn’t impressed by Batman: The Dark Knight Part One either.
LEGO MARVEL SUPER HEROES GAME.  The Batman LEGO games are pretty cool, so I bet this will be good.  Set for the Fall, on most major platforms.  It will have the major Marvel characters: Spider-Man, Iron Man, the Fantastic Four, Wolverine and other X-Men, Captain America, the Hulk, Thor, Black Widow, Hawkeye, Deadpool, Loki and Galactus, but initial press also says a total of 100 characters will be playable.
THE WOLVERINE.  James Mangold (the director) has stated that the movie takes place after the first three X-Men films (it’s still not clear whether “First Class” can be worked into that trilogy, particularly given the ages of the characters in each of the films), but hasn’t addressed whether it fits in with X-Men Origins: Wolverine, a film that I enjoyed—except for the treatment of Deadpool.  Of course, hasn’t every reasonable person in the world given up on the possibility of a Deadpool movie by now?  (Except Rob Liefeld, of course.)
DETECTIVE COMICS #900.  More proof that the new 52 is only new when it suits DC.  Issue “#19” of Detective comics will actually be #900 and will cost you eight bucks to read.  That’s fortunate, since I stopped reading it months ago when that horrible Scarecrow story went off the rails into torture porn territory. DEADPOOL.  In April 2013, the great Tony Moore will be replaced on art chores by someone named Mike Hawthorne.  Not a good sign for a book that is only three issues in and already showing signs of wear.
HE-MAN.  Yes, DC is bringing the comic book back. Apparently, they lack any other characters to create books around.
ACTION COMICS.  In March, Grant Morrison and a staple of very good DC artists will hand over the reins of Action Comics to Andy “Shadowland” Diggle and Tony Daniel.  It will no longer be on my pull list, but he’ll be telling the story of when Superman and Luthor first met in the new 52 DCU.
INDESTRUCTIBLE HULK.  If you’re not reading Mark Waid’s really fun reboot of Mr. Greenjeans, start now.  Because in April, on #6, the great Walt Simonson is coming on board—and the issue will feature Thor, the character Simonson is best associated with (and for good reason).
THANOS RISING.  Jason Aaron and Simone Bianchi are rejiggering Thaos’ origin for a miniseries.  But it will never, ever compare the Keith Giffen’s seminal 12-issue Thanos series, or the work Jim Starlin did with the character.  Probably won’t be as good as the Abnett/Lanning stuff (at least their first two or three minis)—but that’s conceivable at least.
Comic Book News
Tweet Pin It