The first in a series of tributes to each of Earth’s Mightiest Heroes because…Well, you know.  Today: Hawkeye! 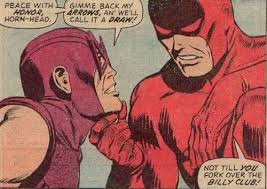 1.  The Hawkeye Miniseries by Mark Gruenwald

2.  Tales of Suspense #57 “Hawkeye the Marksman.”  The origin–in which Hawkeye was introduced as a villain by the great Don Heck.

3.  Deadpool: Dark Reign.  Okay, okay, that was Bullseye as Dark Hawkeye…But it was hilarious and fabulous, all the same.

4.  Earth’s Mightiest Marksman.  Another humorous one…

5.  The Avengers #233, in which Hawkeye takes on Taskmaster…And one of the greatest covers of all time.