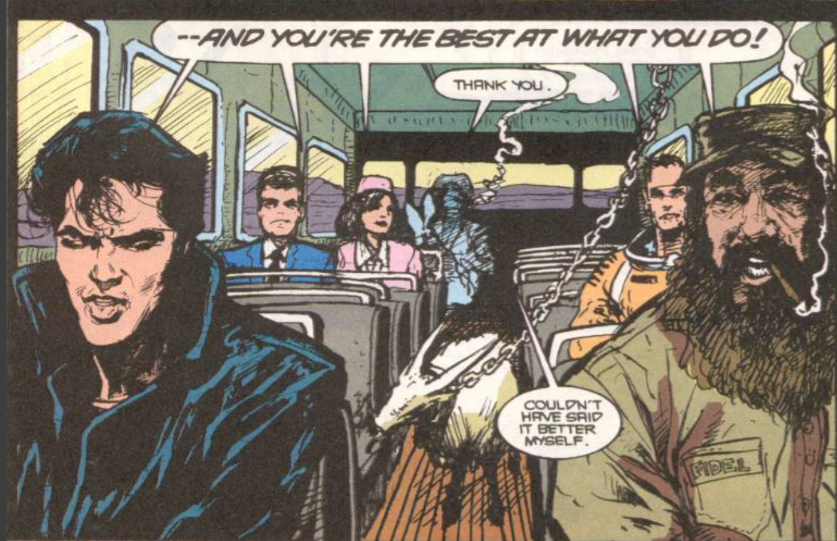 I wish I found the lost-memories plotlines in Wolverine more interesting.  This one tries really hard by providing hallucinations of all kinds of celebs.  But I side with Chris Claremont that the character was more interesting without the over-reveals of the late ‘80s/early ‘90s.

Anyway, it’s more of that in this story.  Xavier’s “unblocking” of Wolverine’s memories has him mentally moving between the past and the present, hallucinating scenes from the 1960s and angels, and stuff like that.  He wanders off, and some X-Men go a-searchin’.  Actually, he gets triggered to complete an old contract from the days when he was a paid government assassin, partnered with Sabretooth.

This ties in with a subplot where Maverick is tracking someone who is killing mutants.

Wolverine’s target is a mutant with mind-reading skills, and he also dips into helping unblock memories, providing a “flashback” story of Wolverine’s original, aborted 1960s mission.

And throughout, I can’t help but wonder if any of this is real.  Wolverine’s blocked/unblocked and false/real memory device can be an endless fountain for true/partly true stories, but as readers we’re never really clear no what’s what.  As such, we’re really left out of the whole point of the story and it just feels like a hodge-podge.