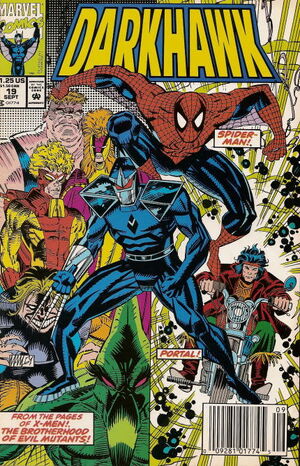 Look how many exclamation points are on the cover!

Portal recently lost his armor.  The Genetech Corporation got a hold of it.  Portal wants it back.  And Toad leads his re-formed Brotherhood of Evil Mutants in a raid to get the armor, (wrongly) thinking that the armor is how Portal gets his teleportation ability.  And Darkhawk also wants the armor, thinking (rightly) that it is similar to his own armor. And finally, Spider-Man happens to swing by when everyone is fighting.

AND, if that’s not enough, after Spidey and Darkhawk fight off the Brotherhood and Portal gets his armor back.  But Sleepwalker wants it too, because he thinks he can use the interdimensional teleportation powers to get him off Earth and back home.

So then they fight.  Portal teleports away and manages to get himself kidnapped by the Brotherhood of Evil Mutants after all.  Sauron mind-controls Portal to get him to do crime with them.  Then Spidey and Darkhawk track them down and there’s a rematch fight.

During which, Spider-Man is teleported to the dimension of the Mindless Ones.

It ends with all the parties going their separate ways, and Portal having his armor back.

The fighting in these issues feels contrived, and it seems like the story being told here could have been done much more elegantly.

Note: Sleepwalker #18 finishes off this crossover story in the first pages and then goes directly into a pointless Infinity War crossover, not discussed above because, like I said, it’s pointless.