The Guardians of the Galaxy traveled “back” in time, to our time, for the Infinity War event, and they’re still here.  And while they’re here they have the classic “go back in time and kill Hitler” conundrum.

The want to kill the entire race of Badoon, who in the future will try to wipe out all humans.

The team has internal conflict, and Major Victory quits. 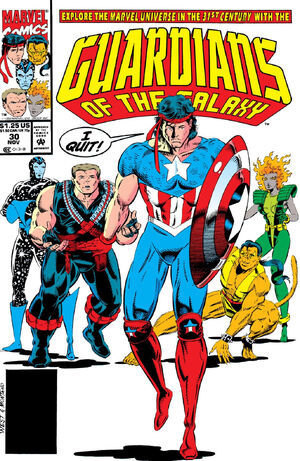 As a result, he starts bonding with Captain America at Avengers Mansion.

Cap also, obviously, disagrees with genocide.  He just did so during Operation Galactic Storm.

Cap gives Major Victory one of his patented, paternalistic/mentorship talks, and Major Victory rejoins the GotG en route to killing the Badoon.  Dr. Strange helps him teleport there, so he’s also in this story.

And when they get there… 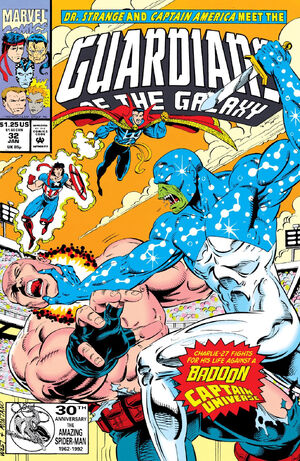 One of the Badoon gets the power of Captain Universe, so the Guardians/Dr. Strange have to face off against the uni-power before they return home.

Also in this story: Starhawk and Aleta battle over the same body, and Aleta wins, so Starhawk is now a female. 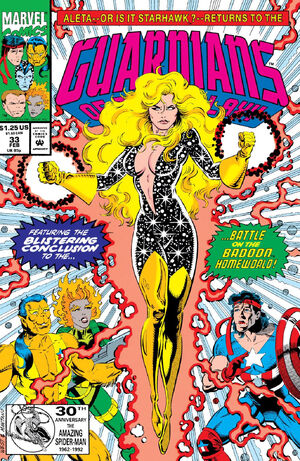 Not the first time we’ve seen a hero sex change, and not the last.  The only really problematic thing about this is the same problem I had with James Rhodes becoming Iron Man: It’s a way to create diversity, but the “diverse” person simply takes on an existing mantle—which makes the character inherently less diverse.  It’s not a real problem if, at the same time, new characters are introduced who are from underrepresented groups.  And to be fair, Marvel introduced Rage around the same time.  (But also introduced white male characters Sleepwalker and Darkhawk.)