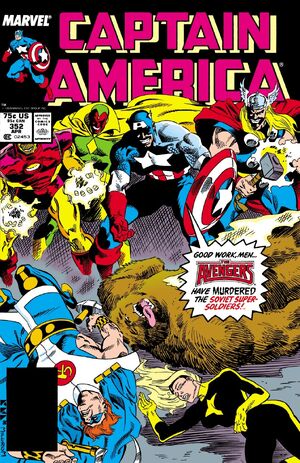 Now that Steve Rogers is back in his red, white and blue outfit, he’s back with The Avengers and he’s killing the Soviet Super Soldiers.

No, of course what’s on the cover doesn’t actually happen. 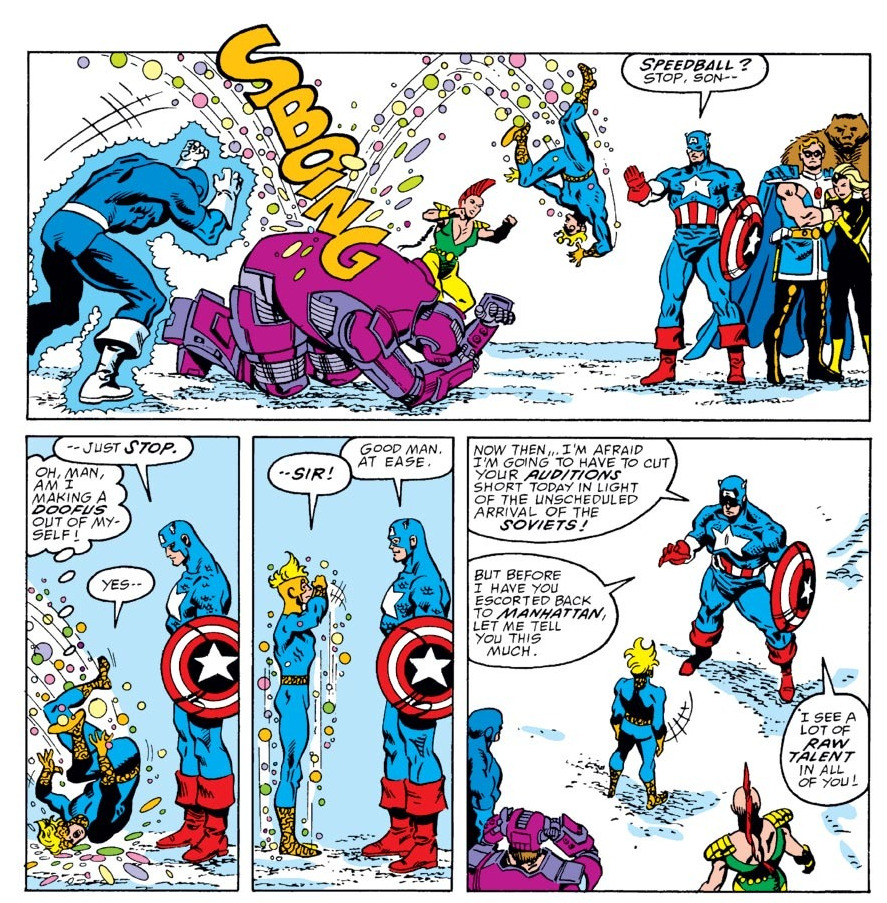 The story starts with four heroes “auditioning” to be part of the Avengers and, for the first time in his life, Fabian Stankowicz is actually the best of the bunch, defeating Speedball (who Marvel still doesn’t know what to do with), Blue Shield (who debuted in Dazzler almost 10 years ago and hasn’t been seen since) and Gladiatrix, who was a wrestler back in John Byrne’s The Thing solo comic.   Obviously, none of them make it. Frankly, given Stankowicz’s history as a guy who randomly and repeatedly attacks Avengers mansion, I don’t even understand how he’s not at least on probation with a term requiring him to NOT GET INTO STUPID ARMOR SUITS ANYMORE.

During the audition, the original Soviet Super Soldiers land unannounced (and uninvited) on Avengers Island, skirmish with the four candidates, and then decide to talk not fight when Captain America shows up.   The Soviet Super Soldiers say they want to defect from Russia to the U.S.  Which begs the question: Avengers Island is in international waters.  Why wouldn’t they go to the U.S.?

While the political particulars are worked out, the SSS’s see Reagan on TV and get upset.  It’s kind of a funny scene. Cap tells them that he’ll only support their defection if they pass a fighting test, so he brings in some fellow Avengers—only we quickly learn that these are actually new Soviet Super Soldiers—calling themselves The Supreme Soviets—and they’re trying to kill the SSS’s before they can defect.  Their membership: Crimson Dynamo, a new version of Red Guardian, and three new characters named Sputnik, Perun, and Fantasia.  Of these new characters, only Perun warrants an actual character tag at the bottom of this post because he’ll go on to have a bunch of appearances without the rest of the team.   How did they get to the island?  How did they so easily access the structures on the island and get a room to “fake fight” the old Soviet Super Soldiers?  None of this is explained.  I know people broke into Avengers Mansion a lot, but at least there were defenses.   What happens next is very, very confusing.  The Soviet Super Soldiers are left “dead” on Avengers Island while the real Captain America happens to be flying to Russia as a diplomat.  Strange coincidence, eh?  And it’s never explained.

The Supreme Soviets race back, apparently, because the new Red Guardian greets Cap and the Supremes accompany Cap on his travels in Russia.  The group are attacked by a darkforce creature and eventually we see that Darkstar the original Soviet Super-Soldiers from death by transporting their souls to the darkforce so, by the end of the story, the Soviet Super Solders return to their bodies.    Then all of this is dropped.  We don’t see whether they actually defect.  There are no repercussions from the Supremes invading Avengers Island or attacking defecting citizens.  It’s just dropped.  Cap puts it best: Yeah.  A baffling end to what started as a decent story.