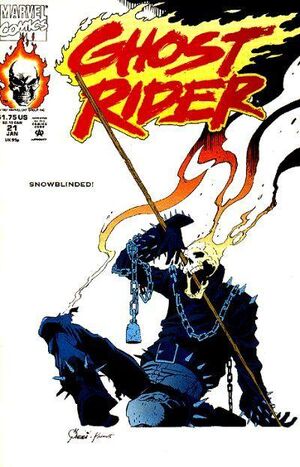 Issue #21 is a “split” issue, with every page evenly split between Ghost Rider tracking down Deathwatch and a vicious motorcycle-riding cop tracking criminals.  In this way, it kind of sets Ghost Rider up as a rational actor—like a law enforcement person.  But Ghost Rider is supposed to be about vengeance—he gets drawn out by the spilling of blood.  This doesn’t really work well.

But it’s a nice try.

The reason it’s needed is because the cop is Michael Badilino, who becomes the supernatural character Vengeance.

But he’s not Vengeance yet.

Anyway, Danny Ketch in his human form is also tracking Deathwatch—he appears to be embracing his new role.  He even calls Johnny Blaze for advice.  (Nothing really eventful happens in the call, but it seems like a way to keep us aware of the fact that Blaze is out there and will be back.)

Of course, Ketch and Badilino’s stories eventually overlap, and the two characters collectively take down Deathwatch—killing him.  Andy Kubert draws the final panel… …Because he’ll be taking over the art chores.

GR is wondering what he’ll do now that he’s vanquished Deathwatch’s army.

Credits: Howard Mackie with Ron Wagner (#21) and Mark Texeira (#22-24)
Grade: C-.  This has been a good book so far, but these issues feel a little cramped and forced, and the art is starting to get sloppy.  Anxious to see what happens when Kubert comes aboard.