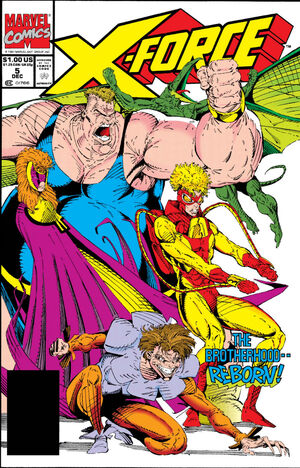 A “new” Brotherhood of Evil Mutants, what with Magneto being “dead” and all.  Like many comics from this period, it’s light on plot. 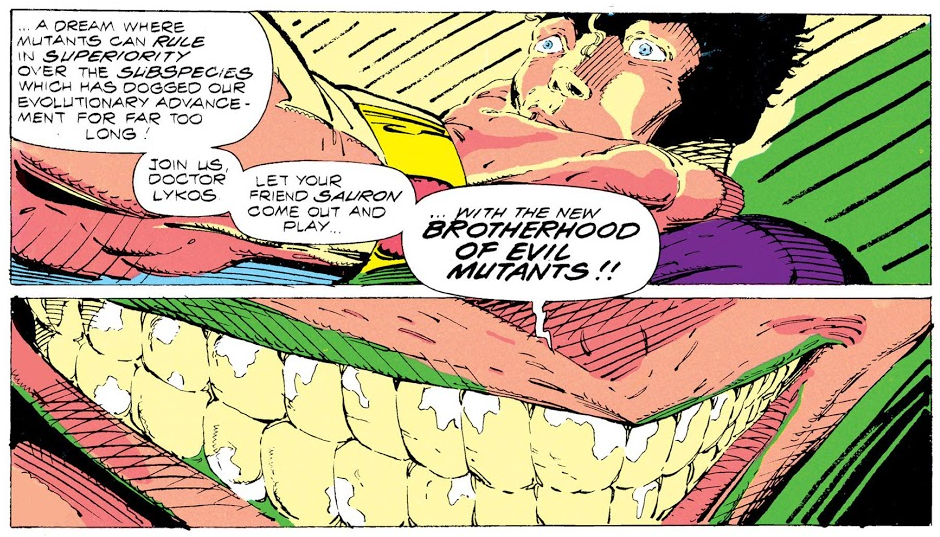 Basically, we see Blob and Pyro collecting Sauron, Masque, and a new villain, Phantazia, to form the team, under the leadership of Toad. Yes, Toad.  The guy who up to now has been a scraping, servile creep.  Now he’s a leader of men.  Actually, he’s a leader of SAURON for goodness sake.  That dude used to lead a ton of mutates himself. 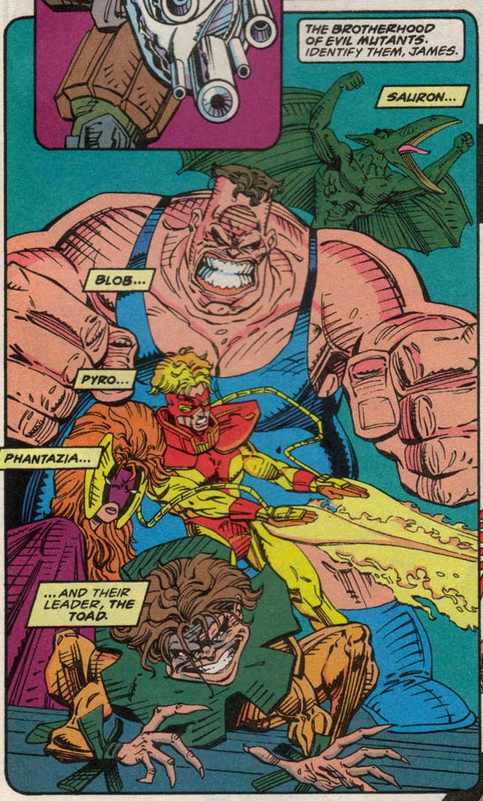 Simultaneously, we get a few pages on Boom Boom, Warpath, and Shatterstar—full of their internal dialogue and doing action poses.  This is what passes for character-building in the ‘90s.  Oh, and lots more posing. 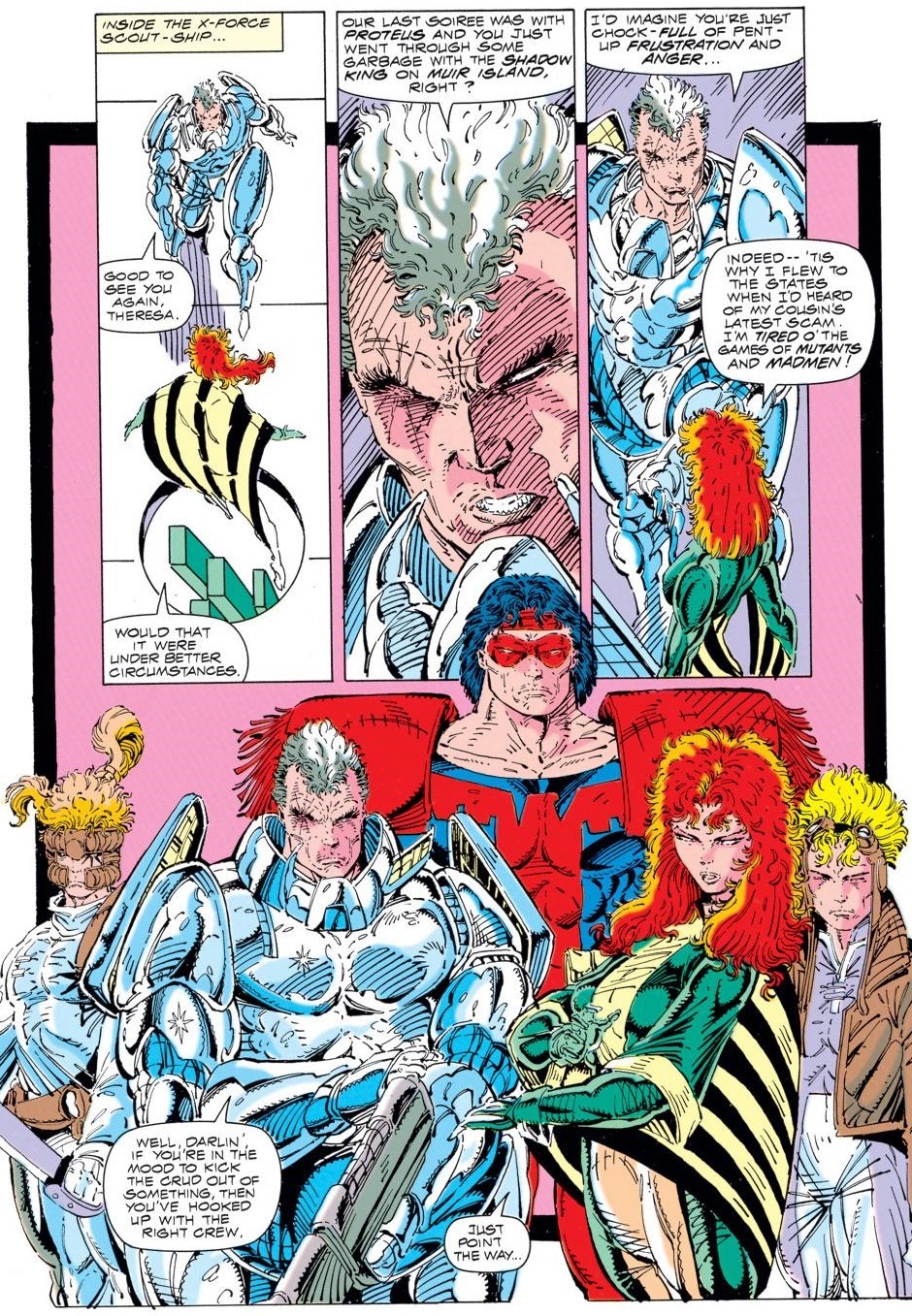 It’s not bad—it’s just very different from the ‘80s, which focused on interactions between characters, like sexual/bromance relationships, to show you what the characters were about.

There’s also a sequence with G.W. Bridge briefing Nick Fury Henry Peter Gyrich and Valerie Cooper about X-Force, and saying he has a “past” with Cable. We kind of knew that already, but we’re seeing suspense-building about it.  No real information, just dramatic tension.

Then, it’s on to the action.  And that cannot be overstated.  We basically have a fight that extends over five issues.

A few interesting developments along the way: Cable is buying his gigantic guns from A.I.M. because the criminal enterprise are the only ones who have weaponry similar to future weapons, i.e., hand-held guns bigger than the person who holds them. 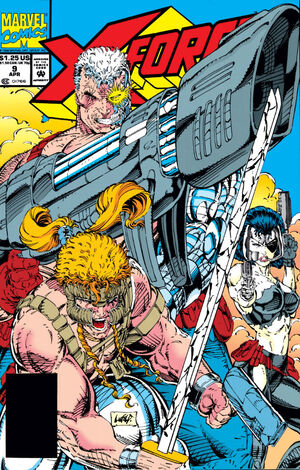 That’s strange, because all A.I.M. ever seems to do is lose fights to Iron Man, but I guess Stark International wouldn’t sell to a self-styled mutant vigilante like Cable. 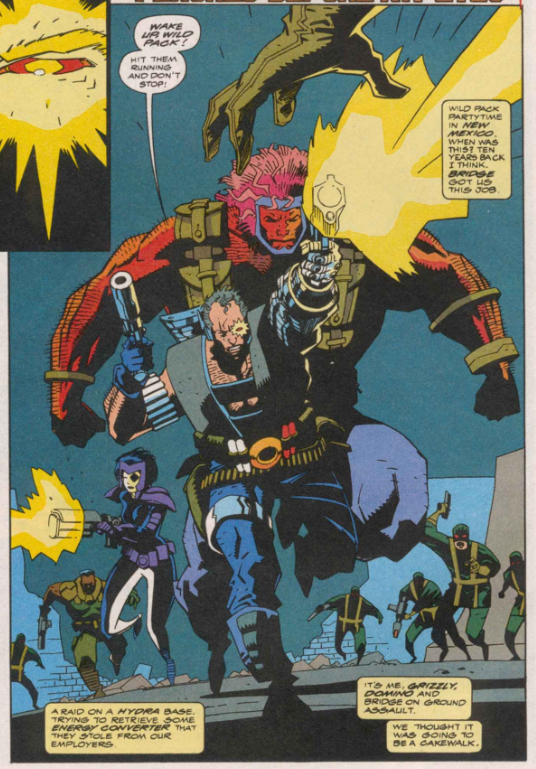 Issue #8 is a flashback with art by Mike Mignola, whose stylized work is a welcome break from the testosterone of Rob Liefeld.  It goes into detail about Cable’s relationship with A.I.M., and takes place a decade earlier, with Cable leading a different team, called 6-Pack, that included Domino and G.W. Bridge (!), as well as two new characters named Hammer and Grizzly.  More will be revealed on this, including that Deadpool was in the band, and also Kane, the new Weapon X. 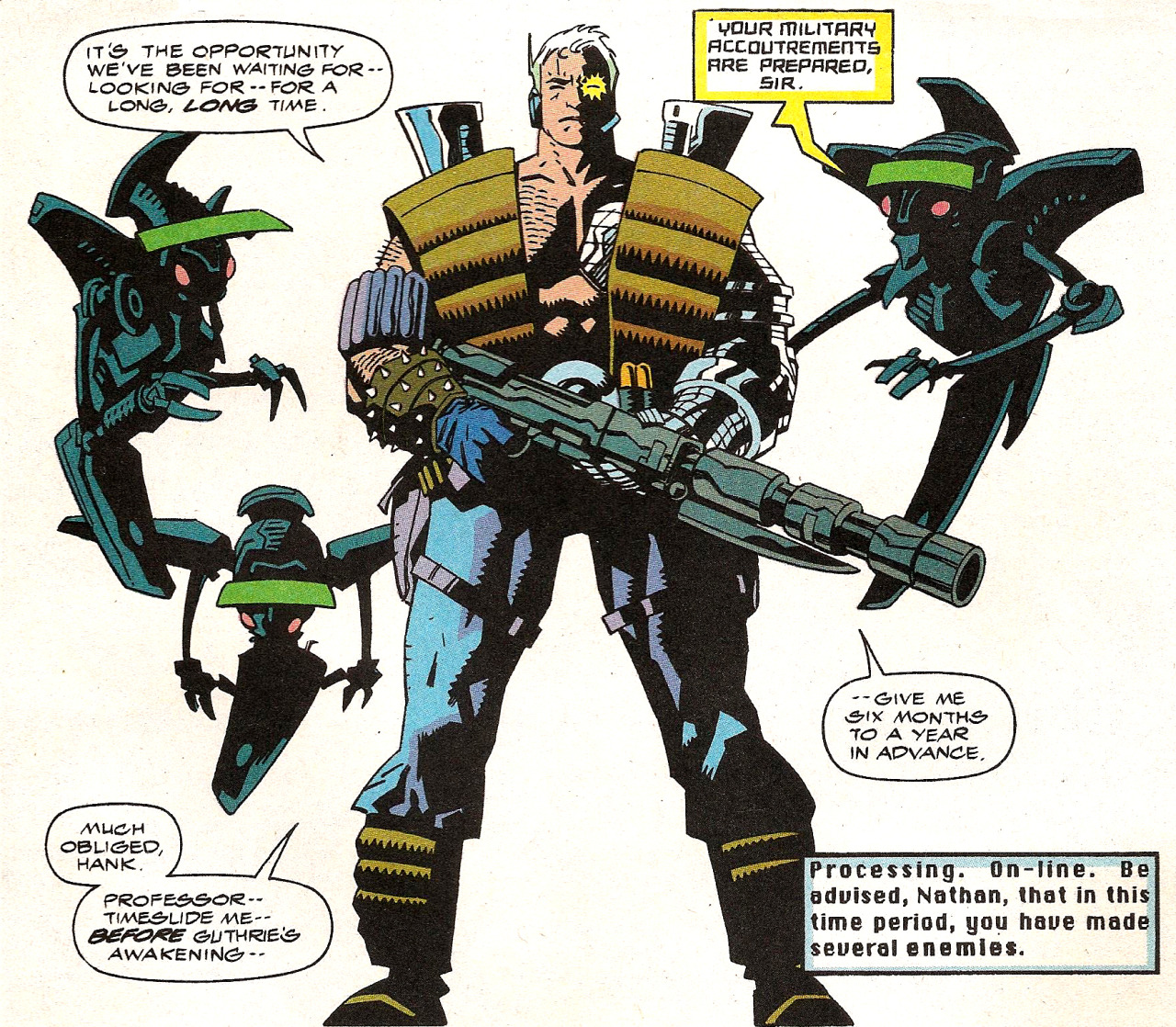 It also shows Cable teleporting (bodysliding) and time-traveling (timesliding) into the future.  I’m not sure his being from the future is a big revelation at this point, but it wasn’t very developed as a plotpoint, so that’s cool.

At this point, I may be overcrowding issues together, but so little happens in any one issue of X-Force that the bundling feels right.

In issue #9, the fight with the Brotherhood finally ends with Shatterstar stabbing Masque and Cable returning Masque’s cloak to the Morlocks with a warning that they’re better off serving Cable than fighting him. 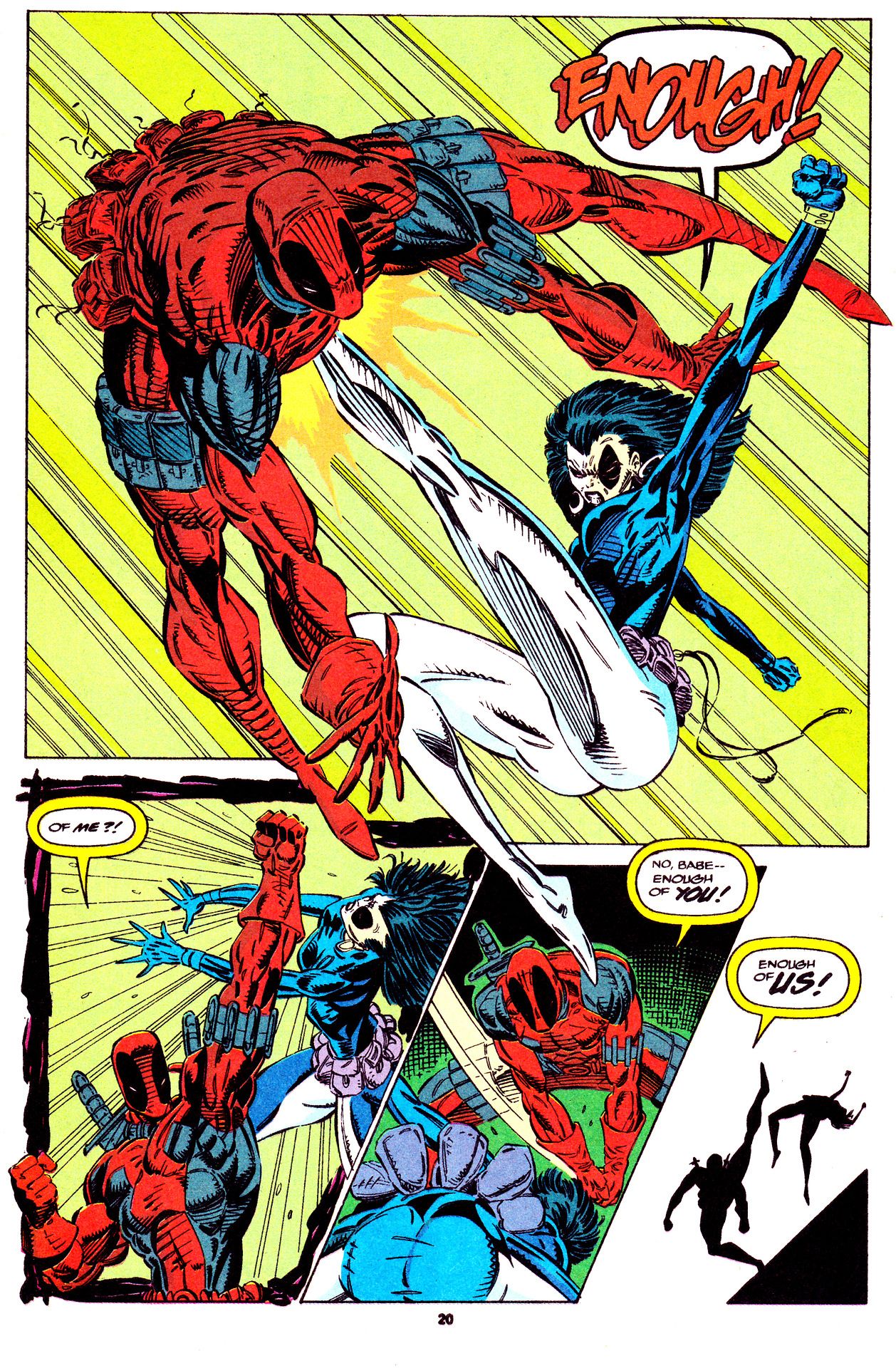 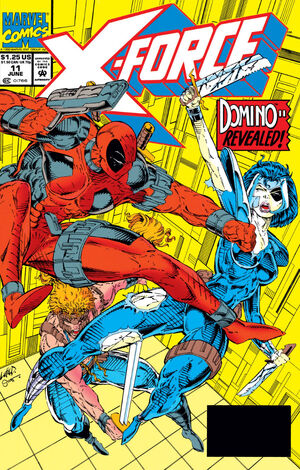 And some stuff with Cannonball being a savior or something, but I’m hoping it doesn’t matter because I skimmed it.  It was intolerable. It’s the first appearance of The Externals, and Cannonball is a “High Lord” who is destined to survive until the 24th Century.

Yeah.  Lots of characters, and a story that’s all over the place.

Creators: Fabian Nicieza and Rob Liefeld, with Mike Mignola art in #8 and Mark Paoella on art in #11
Grade: D+.  I’m sorry, but there’s just not enough here.  Chris Claremont would covered all this ground in two issues, and with more depth to boot.  I know people really like X-Force, but I’m not seeing it.