After almost a year of Punisher fighting street-criminals, mostly killing them, we get a crossover into the greater Marvel Universe.  It’s about the right time: Nine issues to establish a unique tone and mood, and then Marvel’s darkest comic can merge with its second-most dark: Daredevil. 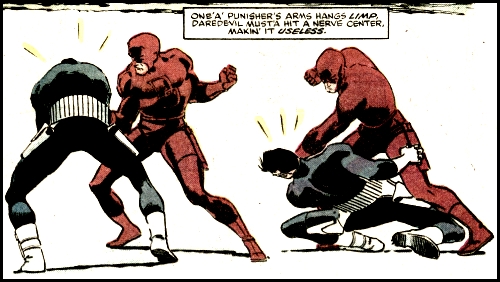 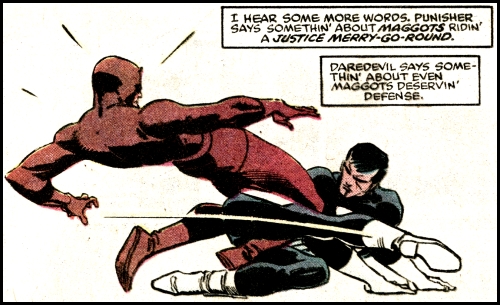 Punisher tracks down a guy who is putting poison in over-the-counter meds at local pharmacies (this really happened with Tylenol in the 1980s and led to the tamper-proof packaging we all “enjoy” today, which makes you get a headache trying to open a bottle of pain reliever). 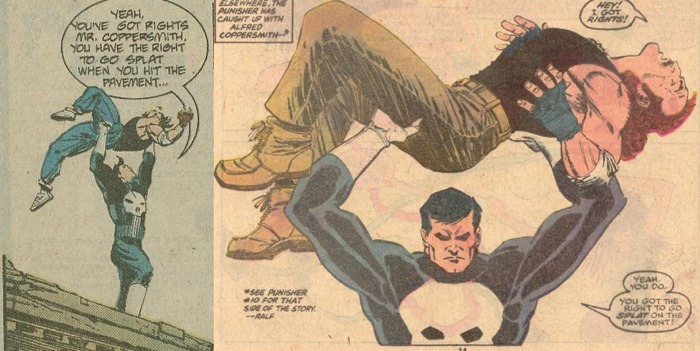 He’s about to throw the bad guy off a roof when Daredevil sees him and stops him.

DD whips Frank Castle’s ass (which he definitely should be able to do—modern Punisher is waaaaaay over-powered–and then takes the villain, “Mr. Coppersmith,” to jail.

It’s very cool seeing the same panels, repeated, in each issue but slightly tweaked by the perspective.

The Daredevil side of the “aspirin killer” crossover with Punisher. Daredevil shows up at the courthouse and is barraged with questions about a recent crack house shoot-up by the Punisher, compared to his own non-lethal attack on a crack gang, and then asked if he’s going to do anything about the aspirin killer in Queens. His response is actually sparser than what’s shown televised in Punisher #10.

The Daredevil side of the same story shows Daredevil as kind of a bleeding heart—more sympathetic to the villain than I’m used to.  It’s basically the same as the Punisher story, though, but where that tale showed Frank Castle’s techniques for finding and stopping the killer, this one shows DD’s. Daredevil #257 also moves the Typhoid Mary plot along by showing her strange relationship with Kingpin.