Why did it take two issues to introduce a character as lame as Swordsman?  I have no Earthly idea.

The dude is a guy who used to perform on the carnival circuit with Hawkeye, but he defeats almost the entire team.  Then, just like last issue when Wanda took out a robot that beat up all the Avengers, Scarlet Witch is on the edge of taking out Swordsman when the villain is spirited away by Mandarin.  Mandarin tries to make Swordsman an ally, but in the end Swordsman decides to walk alone.

The Avengers are really, really lame.  Everyone seems to be able to beat them up these days. Plus, all they seem to do is bicker—perhaps a reflection of how Stan and his major artists seemed to fight all the time in the Marvel bullpen.  Cap fights weird, too.  Why is Hawkeye a “featherbrain?”  I mean, Cap’s the one with wings on his head.

By the end, Swordsman is on the team. 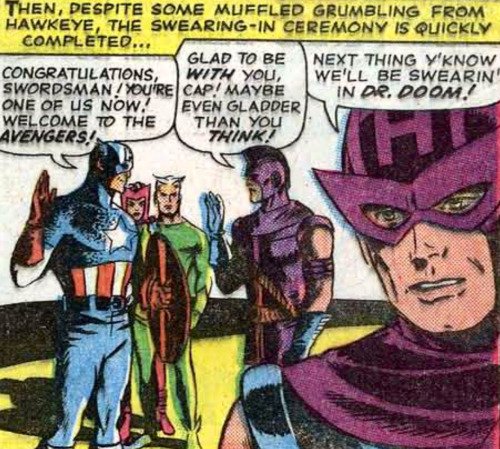 Creators: Stan Lee  and Don Heck
First appearance: The Swordsman
Grade: D-.  I almost gave it an “F”.  The Lee/Heck issues are not good.  Not good at all.